This Hollywood mugshot is quickly going viral... - The Horn News 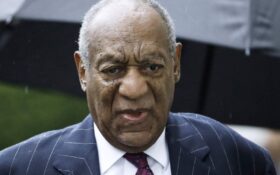 Former Hollywood star Bill Cosby’s latest mugshot went viral on Tuesday, becoming one of the top trending topics on social media hours after it was released.

Cosby, 83, is serving a three- to 10-year prison term. A lower appeals court had upheld his conviction in his latest appeal, but the state’s high court agreed this year to review two key issues in the case.

One involves the trial judge’s decision to let prosecutors call five other accusers to testify about long-ago encounters with Cosby at his 2018 trial. The defense calls their testimony remote and unreliable.

The high court will also consider whether the jury should have heard evidence that Cosby had given quaaludes to women in the past. The evidence came from Cosby’s own deposition testimony in a related lawsuit.

Cosby, a once-beloved comedian long known as “America’s Dad,” became the first celebrity convicted of sexual misconduct in the #MeToo era when he was convicted of drugging and sexually assaulting a woman at his home near Philadelphia in 2004.

His mugshot went viral after social media users noted the convicted sexual predator was smiling in the photo.

Cosby was arrested in December 2015, days before the statute of limitations would have run, after his deposition became public and prosecutors reopened the case. In his testimony, he acknowledged giving accuser Andrea Constand unidentified pills that night that she said knocked her out. Cosby’s lawyers called the encounter consensual.

Dozens of women have come forward over the years to accuse Cosby of sexual assault, and the trial judge deemed him a sexually violent predator.

You can see the mugshot here —

Bill Cosby is trending on Twitter. Why? It appears people are giving attention to a new mug shot on the PA Department of Corrections website in which he appears to be smiling. Cosby, 83, is serving 3 to 10 years in prison for drugging and sexually assaulting Andrea Constand. pic.twitter.com/uVz6MEMUgN