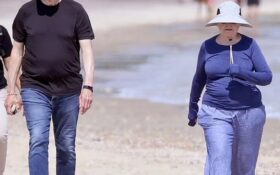 On Wednesday, social media was abuzz over unflattering photos of the Clinton family walking on the beach.

The photos quickly went viral and their glum tone made headlines.

Now they have inspired a video meme from a Trump supporter on Twitter.

The Twitter user “@PapiTrumpo” latched onto a photo of former State Secretary Hillary Clinton. In the original photo, she is sitting on a boardwalk, while former President Bill Clinton looms over her.

This Twitter user animated the photo into a video. In the video, Hillary Clinton is crying about losing the presidential election five years ago. Then, former President Donald Trump enters the shot at the 30-second mark to do a dance.

The image of Hillary Clinton crying is a reference to the public perception of her becoming bitter after losing the election. Clinton herself acknowledged her election-night meltdown in her 2017 memoir What Happened. She wrote, “It wasn’t healthy or productive to dwell on the ways I felt I’d been shivved.”

After Al Gore lost an election, he moved on. He eventually won a Nobel Peace Prize for his activism. Hillary Clinton, on the other hand, spent several months publicly lamenting her loss.

In fact, it has been interesting to see what she does talk about publicly.

She has remained silent on Afghanistan, despite being active on Twitter.

So far this month, she hasn’t sent an original tweet about Afghanistan. The only recent mention of Afghanistan on her Twitter account comes from a retweet of former child activist Malala Yousafzai.

By contrast, this week she has made two tweets about what she calls voter suppression.

We watch in complete shock as Taliban takes control of Afghanistan. I am deeply worried about women, minorities and human rights advocates. Global, regional and local powers must call for an immediate ceasefire, provide urgent humanitarian aid and protect refugees and civilians.

One might expect Clinton — or, at least, the interns who run her Twitter account — to comment on how more than 1,000 Americans remain trapped in Afghanistan. After all, her most recent government position was as secretary of state.

Yet the Clinton family is simply waddling around the beach in Amagansett, New York. They traveled to the upscale beach town presumably to celebrate Bill Clinton’s 75th birthday.

It would take Hillary Clinton only a few seconds to express her sympathies for the people killed in Kabul during Wednesday’s bombing, but she has not broken her silence yet. Meanwhile, the U.S. Senate adjourned for a monthlong recess, while Americans remain stranded in Afghanistan.

If recent polling data is any indication, voters care about the situation… even if Hillary Clinton doesn’t.