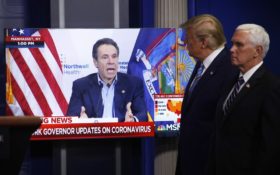 Andrew Cuomo is hanging by a thread.

The New York Democrat’s closest advisers already admitted that the governor covered up the sky-high level of nursing home deaths thanks to his policy of putting COVID-positive patients in nursing homes.

Cuomo has already been accused of threatening to “destroy” Democratic Assemblyman Ron Kim if he criticized the governor’s handling of nursing homes.

Now the number of women accusing him of sexual misbehavior totals six.

And we’re no longer merely talking about harassment.

The sixth accuser — an unnamed woman reported by The Albany Times Union — is now saying that Cuomo reached beneath her blouse and fondled her.

As a result politicians and reporters have called on Cuomo to resign and threatened to impeach him.

According to Fox News, more than 85 members of New York’s state assembly have called for Cuomo to step down — including New York City mayor Bill De Blasio.

“It is disgusting to me,” he said.

“He just can’t serve as governor anymore,” he added.

That hostility represents a head-spinning, 180-degree turn from the 24/7 praise the media showered on Cuomo all through the 2020 COVID-19 pandemic.

Cuomo was said to be calmer, more presidential than former President Donald Trump, who regularly clashed with reporters.

So-called “impartial journalists” could hardly contain their love for the New York Democrat.

ABC’s Good Morning America looked the governor in the eye… and praised his “clear and calm leadership” during a June 2020 interview. U.S. News & World Report laid out “How Coronavirus Made Andrew Cuomo America’s Governor.”

CNN’s Brian Stelter praised Cuomo’s “remarkable show of leadership in recent days.” Reporters kept on praising Cuomo when he flip-flopped and enacted a lockdown, shelter-in-place order after previously ruling one out.

Here are even more of the media’s greatest hits:

Even while Cuomo was said to be serially sexually harassing everyone he could find in a skirt or a pantsuit, the feminist blog Jezebel ran a story titled “Help, I Think I’m In Love With Andrew Cuomo???”

Vogue magazine tried to get a leg up on Cuomo, with Molly Jong-Fast explaining, “Why We Are Crushing on Andrew Cuomo Right Now.”

After the Jezebel article, Cuomo called the author, Rebecca Fishbein, which made Jong-Fast admit, “Even though I’m married and have three children and a fabulous husband I adore, I felt a pang of jealousy.”

Even the conservative New York Post—which rips Democrats across the country—hyped the governor’s sex appeal with the headline, “New York women are coronavirus crushing on Andrew Cuomo: ‘Is he single?’”

The governor got into the act, yucking it up with his brother, CNN anchor Chris Cuomo.

“I am the Love Gov,” Andrew Cuomo had said just as the sexual harassment charges were about to stack up. “I’m a cool dude in a loose mood. You know that. I just say let it go. Just go with the flow baby.”

During another appearance, Chris Cuomo described his brother, Andrew—who is divorced—as “single and ready to mingle.”

When he wasn’t fielding softball interviews, Andrew Cuomo cashed in with a book about his amazing Leadership Lessons From the COVID-19 Pandemic.

And he won an Emmy last November supposedly “in recognition of his leadership during the Covid-19 pandemic and his masterful use of TV to inform and calm people around the world.”

Gov Andrew M Cuomo of NY will receive the International Emmy Founders Award in recognition of his leadership during the Covid19 pandemic & his masterful use of TV to inform & calm people around the world. The Emmy will be presented to @NYGovCuomo on Nov 23 https://t.co/dwKIImwYNV pic.twitter.com/1mKkmg6FKW

The media elevated Andrew Cuomo as part of its unyieldingly negative coverage of then-President Trump.

The media missed Cuomo’s deadly actions and suggestive language, because it looked through the world with “Trump goggles,” said Seth Barron, managing editor of The American Mind.

“Andrew Cuomo bungled the entire response, but because everyone was so fixated on painting Trump as the real enemy, they just had to laud Cuomo as this new, great leader,” Barron told Fox News Channel’s Tucker Carlson Tonight.

That changed the way Americans saw the governor, who became so popular that a poll last April found most Democrats wanted to replace Joe Biden with Cuomo as the party’s 2020 presidential candidate. The Media Research Center found only 0.5 percent of all news stories mentioned the nursing home debacle. That improved Cuomo’s approval rating 20 points.

One of Cuomo’s accusers, Charlotte Bennett, said glowing media coverage convinced Cuomo he could get away with sexual harassment, because “he felt like he was untouchable.”

Now that the media are invested, it still seems they’re not changing their ways for the most part. Last Wednesday, ABC News gave Cuomo’s half-hearted “apology” seven-times as much coverage as the official accusations against him. Now ABC and CBS News have seemingly dropped all coverage of Cuomo’s scandals.

But for the thousands who lost a loved one in a nursing home thanks to Cuomo’s COVID-19 order, and at least six young women, Cuomo’s actions won’t ever go away.