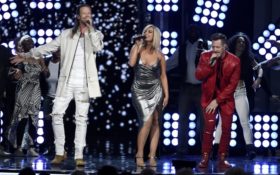 It was just meant to be: Pop singer Bebe Rexha and country duo Florida Georgia Line’s massive crossover hit “Meant to Be” has broken a new record on Billboard’s Hot country songs chart, remaining in the No. 1 spot for 35 weeks.

Billboard reports the song, which was dually promoted to country and pop radio, passed Sam Hunt’s previous powerhouse “Body Like a Back Road,” which held the record for 34 weeks in 2017.

The chart encompasses streaming, sales and airplay. Written by Rexha, FGL’s Tyler Hubbard, Josh Miller and David Garcia, “Meant to Be” has peaked at No. 2 on Billboard’s Hot 100 chart.

The song has been No. 1 on the country charts since it debuted at the top spot in December. “Meant to Be” appears on Rexha’s 2017 EP, “All Your Fault: Pt. 2,” and her full-length debut album, “Expectations,” released last month.

This isn’t Florida Georgia Line’s first time setting a record on Billboard’s Hot country songs chart. They had previously broken the record when their breakthrough hit, “Cruise” with rapper Nelly, topped the chart for 24 weeks in 2012 and 2013. They’ve also had major success with the hit “H.O.L.Y.” — which spent 18 weeks at No. 1.

“Meant to Be” has also made history for Rexha. She surpassed Taylor Swift for the longest leading No. 1 on the country charts for a song sung by a lead female.