This beach sees first sea turtle since 2018 - The Horn News 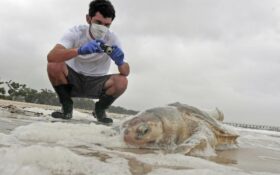 Beach crews have found the first sea turtle nest on the Mississippi mainland in four years.

A Harrison County Sand Beach crew that was cleaning up found what appeared to be turtle tracks just east of the Pass Christian Harbor, officials said.

They protected the area and called the Institute for Marine Mammal Studies in Gulfport, which followed the tracks to a nesting site that is now marked off with stakes and tape.

The eggs likely belong to a protected loggerhead sea turtle or an even rarer Kemp’s ridley sea turtle, which is the most critically endangered species of sea turtle, said Moby Solangi, president of the marine studies group.

The exact species of turtle won’t be known until the eggs hatch in 50 to 60 days. Only about 1 in 10,000 sea turtle eggs reach adulthood. Turtles lay between 60 to 100 eggs in a nest and have multiple nests during a season, Solangi told The Sun Herald in Biloxi.

This is the first sea turtle nest on mainland Mississippi since 2018, although there have been unofficial reports of nests on uninhabited barrier islands, officials said.

The Mississippi Sound and Gulf of Mexico are important sea turtle habitats, but the 2010 oil spill and the 2019 opening of the Bonnet Carré Spillway hurt the turtle population, Solangi said.

“After all the environmental disasters we’ve had, this is a good sign. When (turtle populations) have gone down, it means the ecosystem that supports them is having difficulty. When animals start breeding, it means things have started to get better,” Solangi said.