This 0:27 video will cost Democrats an entire state - The Horn News 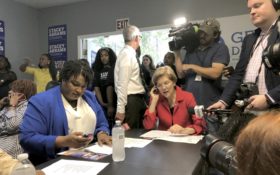 With less than a month before the critical 2018 midterm election in November, the hotly contested gubernatorial race in Georgia is attracting attention from all across the country.

But it may be a slip-up during a short 27-second video that ultimately determines who will be Georgia’s next governor.

It was a week filled with who’s who of Democratic leadership rushing to Georgia to help — including a visit from Sen. Elizabeth Warren to rally voters. But voters may end up only remembering Abrams tongue-tied error come election day.

In a race that recent public polling shows locked in a dead heat, claiming that illegal immigrants will help propel you into power will surely fire up conservative voters.

President Donald Trump’s son, Trump Jr., has campaigned in the state on Kemp’s behalf. He said that electing Republicans like Kemp to positions of power in states was key to the success of his father. He touted policies implemented by his father including recent federal tax cuts and negotiations with North Korea before complimenting Kemp’s leadership in Georgia.

“As successful as my father has been, he cannot do it alone. He needs all of your help. We can keep this going,” Trump Jr. said.

“For the first time in a long time we see actual progress,” he said. “And what do the Democrats want to do? They want to reverse all of that.”

David Ellis, a 59 year-old Statesboro resident, wore a bright red Make America Great Again hat as he listened to Trump Jr. from the back of the crowded conference room.

Ellis said that he was motivated to vote Republican “especially after the Judge Kavanaugh issue,” saying he felt the process for confirming now Supreme Court Justice Brett Kavanaugh was unfair to the judge. Kavanaugh’s confirmation to the nation’s highest court was nearly derailed by decades-old sexual assault allegations.

Ellis also said that illegal immigration was a driving factor in his support for Trump and Kemp. Like Trump, Kemp has made hardline immigration enforcement a centerpiece of his campaign.

“I just feel that you should come into the U.S. legally and not jump a fence,” Ellis said.

“If the far left would stop working against him he would already have that wall built,” Ellis’s sister, 55 year-old Vidalia resident Susan Sheppard, said in reference to Trump’s aspiration to build a wall along the Mexican border.

With voters like that, how do you think this 27-second video will be received in Georgia?