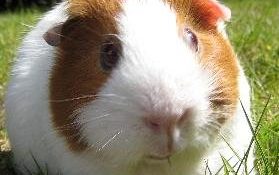 A Kentucky pet store owner says two women stole a pair of guinea pigs, lobbing one of the animals at him during their escape.

News outlets report 21-year-old Isabelle Mason and 19-year-old and Jaimee Pack on Saturday tried to smuggle out the animals from Pet Paradise without paying. Owner Scott Gonyaw told WKYT-TV he confronted the suspects, screaming “Give me the guinea pigs!” as they got into a car.

One suspect rolled down a window and tossed a four-month-old guinea pig named Lucky onto the concrete. The other ran over Gonyaw’s foot with the car. He says he suffered bruising.

Lucky wasn’t injured, and the other guinea pig remains missing.

Jail records show Danville police charged the women with shoplifting, robbery and animal cruelty. It’s unclear whether they have lawyers.