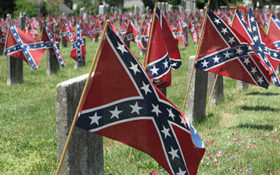 Three iron crosses marking the graves of Confederate soldiers have been taken from the ruins of a 260-year-old South Carolina church destroyed during the Civil War.

The caretaker of the site, Bill Sammons, said someone had to dig up each Southern Cross of Honor set in heavy concrete at the Old Sheldon Church.

Beaufort County Sheriff’s Capt. Bob Brummage said the crosses could have been stolen any time in the past month. He says deputies have no suspects, and the thieves left no note nor graffiti to suggest a motive.

Sammons thinks the thieves wanted to vandalize Confederate memorials. But Civil War collectors say there is a brisk market in hard-to-trace memorabilia.