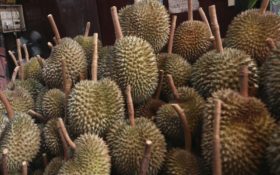 Police in Hawaii are investigating the theft of fruit valued at about $1,000 including durian, which is known for its powerful odor.

Two men entered a property in Hilo on the Big Island and removed 18 durian and other types of fruit on the night of Feb. 1, the Hawaii Police Department said.

Authorities released a surveillance camera image of two suspects and asked the public for additional information that could lead to the capture of the fruit bandits.

The tropical, spiky durian fruit resembles a small porcupine and typically weighs from 2 to 7 pounds (1 to 3 kilograms).

Durian is known for a pale yellow flesh with a sweet taste but a smell that has been compared to moldy cheese, rotten onions, dead fish and far worse.

Durian is popular across Southeast Asia but also is commonly banned from hotel rooms and public transportation there.

The smell of rotting durian in a cupboard was mistaken for a gas leak and prompted an evacuation of a library at the Royal Melbourne Institute of Technology in Australia in April 2018.