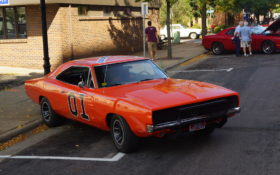 A Colorado man has been ordered to pay more than $28,000 to cover damages after he pleaded guilty to stealing a Sno-Cat painted to look like the “General Lee” car featured in the TV series “The Dukes of Hazzard.”

The Vail Daily reports the owners of the Sno-Cat said Jason Cuervo damaged the tracks, axles and electrical system after stealing it last year.

Authorities say Cuervo hitched a trailer holding the Sno-Cat to his pickup truck in Minturn and hauled it along Interstate 70 to Grand Junction.

He was arrested a few weeks later at an auto shop.

Cuervo blamed the crime on his opioid addiction and is serving three years in a community corrections program after pleading guilty to aggravated motor vehicle theft.