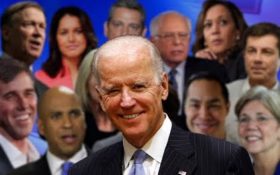 Still 18 months away from the election, and already a couple of Democratic hopefuls look poised to be the first to drop out of the presidential campaign.

With the list of candidates seeking to dethrone President Donald Trump now at 22, at least two former frontrunners are rapidly approaching a day where they’ll face a hard choice.

So far, the race to 2020 has been brutal for South Bend, Ind., Mayor Pete Buttigieg and former Texas congressman Beto O’Rourke.

Buttigieg, or Mayor Pete, was once praised by the media for his youthfulness and energy and his ability to reach America’s heartland, where he’s from.

He couldn’t get just one vote in the critical primary state.

According to Newsweek, the African-American vote makes up 61 percent of the South Carolina primary electorate… and not one is willing to vote for Buttigieg.

"It was very profound that he actually was aware of his problem," says Charles Patton, the student who confronted Pete Buttigieg on his lack of black voter support.

"The only problem that I think he has is that we just don't trust him," Patton adds https://t.co/3ppn63Y72O pic.twitter.com/NwAcajHtQn

Mayor Pete isn’t the only one that has hit a wall.

O’Rourke, who captivated the mainstream media’s attention in 2016 for his failed campaign against Sen. Ted Cruz, R-T.X., has faltered too.

He is doing so poorly, his team recently announced a total campaign re-launch.

Beto, it seems, is out of buzz.

The same poll that shows zero votes for Buttigieg in South Carolina isn’t much better for O’Rourke. Beto registered at a measly 2 percent — only 1 percentage point above failed 2018 Georgia gubernatorial candidate Stacey Abrams.

Abrams isn’t even running for president!

O’Rourke’s ship has been sinking and even his campaign team knows it. Senior aides have been jumping ship recently.

Both O’Rourke and Mayor Pete are driving their campaigns to the bottom of the lake.

They could be the first two candidates to drop out — but they won’t be the last.