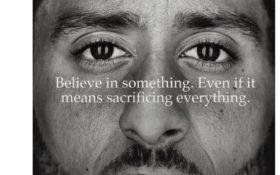 On Monday, Nike announced they would be using former NFL quarterback Colin Kaepernick as the face of their controverisal new “Just Do It” campaign — and Americans have been in an uproar ever since.

Only a few days have passed since the announcement was made, but social media users have been in a frenzy. Clever conservatives have created memes to mock the mega sports company that just paid millions to someone for disrespecting the American flag.

Nike’s new advertisement campaign featured the slogan, “Believe in something. Even if it means sacrificing everything,” with Kaepernick’s face behind the catchphrase.

Believe in something, even if it means sacrificing everything. #JustDoIt pic.twitter.com/SRWkMIDdaO

Nike meant for their new campaign to be a promotion of the former quarterback who trashes the American flag, protests our police officers, wears communist t-shirts… but, of course, the new ad has only inspired mockery.

I would like to personally thank @Nike for all of the new memes that this “great” ad campaign has produced. pic.twitter.com/51C8jLWgoy

I want to congratulate Anthony Weiner on his new Nike deal… #JustDoIt pic.twitter.com/3rHJBZAQ5p

The folks at @NFL_Memes have created a great parody of the Colin Kaepernick #Nike ad…this one featuring Iron Mike Tyson. ???? #sportsbiz pic.twitter.com/I3OU79wCDM

This is the best Nike Ad pic.twitter.com/DlI757HfvG

7. Dwight Schrute from “The Office”

Alright, this is my favorite Nike ad meme. pic.twitter.com/WoZeplyHof

Let’s talk about others who sacrificed EVERYTHING. pic.twitter.com/FjPdBOkEO3

I'm officially over the Kaep/Nike memes.

Also, I really, really love/hate whomever did this. pic.twitter.com/fEQ2mHBf7A