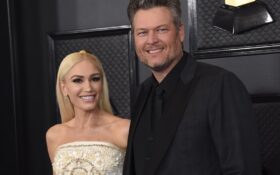 “The Voice” co-stars Blake Shelton and Gwen Stefani are engaged and sharing the good news on social media.

Shelton and Stefani posted a picture Tuesday announcing the engagement between the country star and the pop singer. “Hey @gwenstefani thanks for saving my 2020… And the rest of my life.. I love you. I heard a YES!” Shelton wrote.

A representative for Shelton confirmed the couple recently got engaged while in Oklahoma, where Shelton lives.

The two stars met as judges on the singing competition show years ago. After Shelton divorced Miranda Lambert and Stefani divorced her husband Gavin Rossdale in 2015, the two later began dating.

The two have recorded duets together, including “Nobody But You,” which just won a CMT Music Award last week.