The sound of silence! Global 'air guitar' competition kicks off - The Horn News 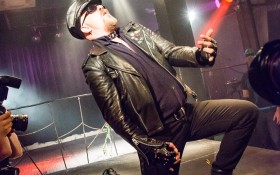 Who can play wildest on an instrument no one can see? A record 30 air guitarists from a dozen countries are jamming on a stage in northern Finland to answer just that question.

The competition started as a joke by a local musician, adding to the small Nordic nation’s reputation as an inventor of offbeat summer events such as the “mosquito slapping” and “wife carrying” competitions. It has gradually spread worldwide with national events held annually in several countries.

The 2002 champion, London architect Zac Monro, is back after a break of 13 years seeking to rekindle that “special flame that breaks the mundane” — although he no longer feels a need to win.

“It’s a great crowd and it’s just good to be here among all these people who enjoy doing this crazy thing,” said Munro, who goes by the stage name “The Magnet.” All the same, he said, he’d like to be in the final “instead of just watching.”

Germany’s national champion, Sabrina “Lady Liberty” Schramm from Munich, is already in the final but she’s still nervous, wringing her hands as she declares she “yearns to win.” She caught the competition bug when she finished ninth in Oulu in 2014.

“I was brought up on rock music. I just love it,” she said. “When I saw a local air guitar competition in my home town I thought that’s the most crazy thing thing you can do, so I just had to do it.”

Oulu’s mayor is also enthusiastic, describing the event as “creative craziness,” which has become part of the image of Finland’s northernmost city, a high-tech hub that provided a large workforce for Nokia before it sold its ailing smartphone division to Microsoft.

“It plays a vital role in our dynamic society and our ecosystem. It’s a city of young people with an average age of 37, which needs this kind of innovative thinking,” Matti Pennanen said. “We want to keep it going for as long as possible.”