The next Winter Olympics will be hosted by... - The Horn News 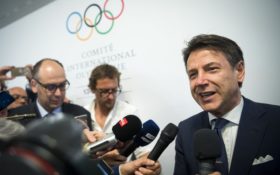 Italian officials insisted their debt-hit economy can support hosting the 2026 Olympics, and Sweden’s prime minister promised his apparently skeptical nation also wants to do it.

Milan-Cortina and Stockholm-Are would likely have failed to come this far in previous Olympic bidding contests run under stricter rules demanding financial guarantees and government support earlier in the process.

Though Milan-Cortina has long been favored to win, bid leaders met with around 80 IOC voters on Monday amid increasing European Union scrutiny this month of Italy’s national debt.

“We have budget problems in Italy but I think that this is something that everyone has,” Italy Undersecretary of State Giancarlo Giorgetti said at a news conference, citing the wealth of the Lombardy and Veneto provinces underwriting the games costs.

“They are two of the richest provinces in Europe,” Giorgetti said. “They certainly have the capacity, they have the readiness, they have the finances in order to be able to support the event.”

The IOC has promised to contribute at least $925 million toward games operating costs of up to $1.7 billion. Building athlete villages in Milan and Stockholm shape as the main capital investment and biggest risk to the projects.

Both candidates were questioned in closed-door session by IOC members, with the Swedish bid challenged to prove support from a Stockholm city authority coalition formed last October and a national government only five months ago.

One factor favoring the Italian bid — uniting Milan, the Alpine ski resort of Cortina d’Ampezzo, and several towns in between — is the IOC’s own polling which puts support from local residents above 80% compared to Swedish public backing around 60%.

The 2026 contest meets the IOC’s long-stated wish to return to traditional heartlands for winter sports after projects in Russia, South Korea, and China that required billions of dollars of investment in new venues, and potential white elephants.

A signature feature of the Swedish bid is using an ice sliding sports track in Sigulda, Latvia, instead of building a new venue at home.

The IOC has praised both candidates for projecting sports budgets “on average 20% lower” than spending on the 2018 Pyeongchang Olympics and 2022 Beijing Olympics.

Up to 82 IOC members will vote after both candidates return to the stage for the traditionally slick and emotional pleas to be awarded the games.

Sweden’s heir to the throne, Crown Princess Victoria, is part of a 100-plus delegation at the Swisstech convention center.