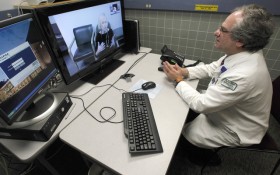 When you’re coming down with a cold, there are a few items you typically reach for to start feeling better: cough drops, herbal tea, maybe an over-the-counter medication.

For most of us, though, a smartphone wouldn’t top that list. But that may change as health care companies increasingly steer customers toward streaming video apps that connect patients with doctors online.

The push toward virtual health care comes as many primary doctors are over-booked and patients struggle with their own busy schedules. At the same time, insurers and employers see an opportunity to save money by reducing pricier visits to doctors’ offices and urgent care clinics.

Outsourcing care is not new. In rural areas, doctors have long relied on telephone and video connections to consult with specialists far away.

But this year an estimated 450,000 patients will see a doctor over the Internet for basic ailments like colds, infections or aches and pains, according to the American Telemedicine Association industry group.

In the last year, several leading health care companies announced they would begin incorporating telemedicine into their offerings. Walgreens is currently rolling out a virtual doctor service in 25 states. Meanwhile, UnitedHealth Group and the Blue Cross-Blue Shield insurer Anthem prepare to make telemedicine services available to more than 40 million people by 2016.

This increased adoption is partially a response to recent law changes in 29 states requiring health insurance companies to cover telemedicine delivered via online video or over the phone. Additionally, the programs appeal to consumers and their employers by reducing time lost to traditional doctor appointments.

“The ability to get a doctor to see you within minutes from your phone is something that people really value,” says Dr. Jonah Feldman, a health care delivery specialist at Winthrop University Hospital.

Most online services specialize in treating easy-to-diagnose conditions, including colds, ear infections, rashes and allergy problems. Doctors in telemedicine companies can usually prescribe from a small list of common medications. The prescription is typically sent electronically to a pharmacy near the patient.

Virtual visits can also be effective for addressing mental health issues like anxiety and depression.

“There’s just not enough access out there in the country,” Brewer says. “So you have that ability for mental health providers, as well as primary care docs, to be able to see more patients, provide more access online.”

It’s important to note that the level of care available to patients can vary by state. For instance, some states require a doctor to have an established relationship with a patient, which might include a physical or mental exam, before allowing them to do a telemedicine visit.