The newest cars being released for 2016 - The Horn News 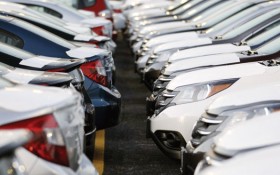 Automakers plan to debut 45 new vehicles at this year’s North American International Auto Show in Detroit, which opens to the public Jan. 16. Here are some of the buzz-worthy new cars and trucks at the show.

The tenth generation of the midsize E-Class sedan borrows the elongated hood and gently sloping tail of its big sibling, the S-Class. The E-Class gets a new turbocharged, 2.0-liter four-cylinder gas engine with 241 horsepower (up from 195 in the current four-cylinder diesel) and a new nine-speed transmission. Inside, you’ll find a 12.3-inch navigation display and touch-sensitive controls on the steering wheel, which let the driver control the infotainment system with smartphone-like swipes of a finger. Thanks to upgraded semi-autonomous driving capabilities, the E-Class can change lanes by itself, maintain a safe distance from the car in front at speeds of up to 130 mph and stay in semi-autonomous mode even if lane markings are obscured. For fun, there is ambient lighting system with 64 colors to choose from. Pricing wasn’t announced, but the E-Class currently starts at $52,650. Mercedes-Benz was the top-selling luxury brand in the U.S. last year. U.S. sales of the new E-Class start this summer.

The Envision midsize crossover, built in a Chinese GM factory, has a sculpted exterior design and a dashboard that wraps into the doors. The Envision is powered by a 2-liter turbocharged four-cylinder engine that puts out 252 horsepower. The SUV comes only with fully automatic all-wheel drive and has a “whisper quiet” cabin on the road, GM says. U.S. sales start in the second quarter of this year, filling a gap in Buick’s SUV lineup between the subcompact Encore and the large Enclave. GM says it made the controversial move to build it in China because it wasn’t economically feasible to build it elsewhere at current sales projections. GM expects to sell three quarters of the Michigan designed SUVs in China.

Ford is adding performance to its midsize Fusion sedan lineup. The Fusion V6 Sport has a twin-turbocharged 2.7-liter EcoBoost V6 engine. It’s expected to get 325 horsepower and 350 pound-feet of torque, about the same as the BMW 340i sedan and ahead of similarly equipped midsize cars from Toyota, Honda and Nissan. The V6 Sport has a unique black mesh grille, a rear spoiler and 19-inch wheels. A new pothole detection system can quickly adjust the shock absorbers to minimize the impact. For the more environmentally minded, Ford says its Fusion Hybrid and Fusion Energi plug-in hybrid models will be getting more efficient electric motors for better fuel economy and electric driving range. Sales begin this summer.

The Raptor — introduced in 2009 — has been a hit for Ford among outdoor enthusiasts and those who like its brawny look. Now, the Raptor drops 500 pounds, making this off-road monster faster and more agile, Ford says. A new terrain management system automatically adjusts the calibration of the transmission, traction control and anti-lock brakes for six modes of driving, including a Baja mode for desert racing and a mud mode for mucky trails. The Raptor SuperCrew goes on sale this fall; pricing hasn’t been announced, but expect it to be in the $50,000 range.

With the sleek, low-slung Avista coupe, General Motors’ Buick brand is reaching back to the days when it sold some serious performance cars. The concept car has a mean-looking front grille, thin LED headlamps, 20-inch wheels and aggressive flared rear fenders. The Avista car has a 400-horsepower twin-turbo V6 engine mated to an eight-speed automatic transmission. Buick says it will have the next-generation of its “Quiet Tuning” suspension, advanced noise cancellation technology, air purifiers and even aroma therapy. GM says the Avista harkens back to the Buick Y-Job from 1938, which the company says is recognized as the auto industry’s first concept vehicle. Now, GM has to decide whether to build it.

Volkswagen needs a hit in the key SUV market and turns to the next generation of Tiguan. The concept version being shown in Detroit has a gas-electric hybrid drive system and bolstered off-road performance. VW says the five-seat concept has two electric motors that boost total system horsepower to 221, pushing the SUV from zero to 60 in 6.4 seconds. The Tiguan concept will be able to go 20 miles in all-electric mode before the gas engine comes on. Depending on driving modes, it can be driven by the front, rear or all of the wheels. It has the latest safety features such as automatic emergency braking and pedestrian detection.

General Motors rolls out a hatchback version of the Chevy Cruze, putting it on equal footing with the Ford Focus and other compacts that come in hatch and sedan versions. Chevy says the hatchback will have 18.5 cubic feet of cargo space behind the rear seat, and 42 cubic feet with the seat folded down. The Cruze sedan debuts early this year, with the hatch coming out in the fall. Both have a new 1.4-Liter four-cylinder engine with stop-start technology that can get up to 40 mpg on the highway. They’ll weigh about 200 pounds less than the previous version. Price for the hatch wasn’t announced. The sedan starts at $16,620 excluding shipping. The problem for both: small cars aren’t selling well in the SUV-crazy U.S. with gas around $2 a gallon nationally.