ISIS or another terror group? Mystery around deadly Turkish bombings - The Horn News 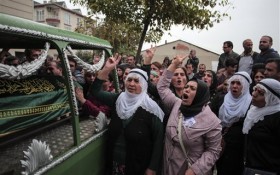 Turkish investigators claim to be close to identifying one of the suicide bombers in the country’s deadliest attack in years, Prime Minister Ahmet Davutoglu said Monday, adding that the Islamic State group was the “No. 1 priority” of the investigation.

However, in an interview with private NTV television, Davutoglu also said the evidence pointed to a different “certain group”… which he refused to identify.

Bombs exploded and killed 97 people at a rally on Saturday to call for increased democracy and an end to the renewed fighting between Turkey’s security forces and the Kurdish rebels that has killed hundreds since July.

On Monday, Yeni Safak, a newspaper close to the government, said authorities investigating the bombings were focusing on the Islamic State group, comparing DNA samples of the suspected bombers with those obtained from families of some 20 extremists they suspect could have carried out the attacks.

No one has claimed responsibility, but the attack bears similarities to a suicide bombing that killed 33 Turkish and Kurdish peace activists near the town of Suruc bordering Syria in July. The government blamed that attack on the Islamic State group.

Hurriyet newspaper said the type of device and explosives used in Ankara were the same as those used in Suruc.

The government raised the death toll in the weekend attack to 97, including one Palestinian. A pro-Kurdish party has said that up to 128 people died.

He said the attack aimed to influence the result of Turkey’s Nov. 1 election and cast a shadow over the polls. He did not elaborate.

Davutoglu rejected opposition accusations that the attacks were a result of Turkey’s involvement in the conflict in Syria and that the government was dragging the country into the Middle Eastern quagmire.

“These attacks won’t turn Turkey into a Syria,” Davutoglu said.

On Sunday, police detained four more suspected Islamic State militants in a raid in the southern city of Adana, the regional governor’s office said Monday. The detentions raised the number of suspected IS militants taken into custody in four cities since Saturday to around 40.

It was not clear if any of the arrests were linked to the peace rally bombings.

Turkey agreed recently to more actively support the U.S.-led battle against the Islamic State group, opening its bases to U.S. aircraft launching air strikes on the extremist group in Syria and carrying out a limited number of strikes on the group itself.