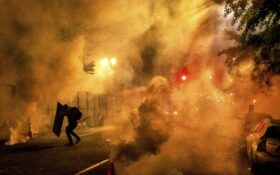 That’s what an 18-year veteran of the Portland Police Bureau told local reporters about the city’s fiery year of Molotov cocktails, bricks, and round-the-clock efforts to burn down the federal courthouse.

“They’re not peaceful!” said Sgt. Brent Maxey, who’s seen it all over his two whole decades on the PPB.

The waves of protests that began just over a year ago, after the death of George Floyd in police custody in Minneapolis, began with “a legitimate group that has a legitimate message,” Maxey said. Decent people everywhere felt their stomachs churn as they watched Derek Chauvin kneel on Floyd’s neck for nine-and-a-half minutes, and some people wanted to protest it. That’s fair, Maxey says. “These have now devolved. They’ve been hijacked by anarchists, essentially,” he told local KGW-TV last August.

The protests broke into violence almost immediately and kept flaming into violent confrontations nationwide…but none quite like Portland, Oregon, a city that has had a reputation for decades as a hive of extreme leftists, socialists, and misfits.

“They’ve just kind of devolved into these masses of people that are just bent on destruction and hurting, mainly hurting police or anybody that really disagrees with that message,” Maxey said.

He said he watched on the front lines as anarchists and Marxists threw “baseball-sized rocks” and small firework-like explosives at uniformed police officers.

And few cities saw politicians rip the police quite the way they did in Portland, either.

At the height of the riots, the Speaker of the House in Oregon, Tina Kotek, wrote a letter calling the police response to rioters “an unnecessary escalation by the PPB against people exercising their freedom of assembly and freedom of speech” which “showed an utter inability to exercise restraint.”

“Nothing about this was smart,” said Kotek, a radical leftist. That sounded a lot like former President Barack Obama, who once accused police of acting “stupidly.” In one case, 9 or 10 radicals chased a Ford truck, yanked the driver out of the seat, and beat him with two by fours until he was unconscious.

They repeatedly tried to burn down the federal courthouse, a symbol of President Donald Trump and law enforcement.

And the protests continue to this day. On the one-year anniversary of Floyd’s death, Portland police had to declare a riot once again.

Protesters changed “every city, every town, burn the precincts to the ground!”

Folks are gathered at the intersection of SW Main and 3rd chanting “say his name: George Floyd!” And “every city every town, burn the precincts to the ground!” Vast majority of 100+ here are dressed in all black.

And the “vast majority of 100+ here are dressed in all black,” the color anarchists wear when they ride into the streets to beat up stray people as a violent gang, according to a reporter for the city’s Mercury News.

Then, the group did what anarchists do best: start breaking things and trying to hurt decent, law-abiding people.

They got into one enormous heap outside the Multnomah County Justice Centre, set a dumpster on fire, and wheeled it over to try and burn down the building.

While they were trying another night of arson, they chanted, “Burn the building down,” according to Portland Police.

The riot finally broke up—but it’s just the tip of the iceberg in a new wave of violence in the loony left city.

After the riots, Portland tried to “defund the police” and it went exactly the way you’d imagine it would.

Murders in Portland have increased an incredible 800% since then—and there have been huge increases every place that tried to “depolice” the streets.

Any guesses of what these cities have in common?

In addition to having some elected officials that don't do their jobs, the leadership in all of these cities turned the keys over to the "Defund the Police" mob. pic.twitter.com/rF5QLskXqE

It wasn’t just the murders, either. The Police Bureau said that the number of “shooting incidents where a firearm was discharged” has exploded. They more than doubled in January 2021 compared to the same time in 2020, and they more than tripled in March.

That’s what happens when your virtue-signaling leadership sides with thugs, vandals, and street toughs against the police.

Supporting the police has never been more important, or rarer, than it is today.