“How tall is Rand Paul?” Here are the top Google questions about presidential candidates… - The Horn News 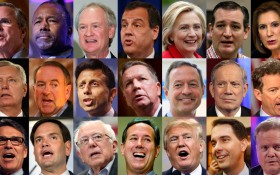 Those were among the top questions that the Internet search engine was asked about each candidate over the past couple of months. The data, which is being released by Google this year for the first time during a presidential campaign, gives insight into what voters are thinking about that is different from what traditional pollsters provide.

The first lesson may be not to forget the basics: shortly after Google first released questions posed about each candidate, Republican Marco Rubio’s campaign released a video in which he answered some of them.

Google gets some three billion search requests each day and is beginning to see the value of compiling that information. For instance, conventional pollsters badly missed the breadth of David Cameron and his Conservative Party’s victory in the British elections this spring. Google didn’t necessarily predict it either, but picked up an intriguing increase in the amount of questions people were asking about the Conservatives in the days before voting, said Simon Rogers, data editor for Google’s News Lab.

The top query for each candidate was:

As the campaign moves along, the types of queries from voters are likely to become much more specific, Rogers said. The data should remind journalists that voters know far less about people running for president than they do, he said. Privately, in front of a computer screen, they might ask questions that they would not necessarily bring up publicly.

There’s plenty of potential for the information Google is collecting. “This is new and we’re only starting to scratch the surface of it,” he said.

In his video, Rubio sensed an opportunity as he read from a smartphone and answered questions posed in Google searches about his age, nationality and whether he was a twin. “No, I’m not,” he said, laughing.

Then he saw an opportunity. The last question he posed: “How can I work on Marco Rubio’s campaign?”

“Well, you can go to our website, that’s the easiest way to plug into our campaign,” he said. “I hope you’ll join us.”