Trump's trip to London includes THIS meeting - The Horn News 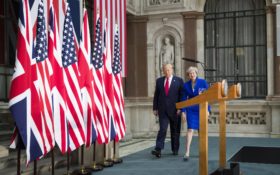 The Latest on President Donald Trump’s visit to Europe:

Brexit Party leader Nigel Farage has held a meeting with President Donald Trump at the U.S. ambassador’s residence in London.

Farage was photographed being driven into Winfield House on Tuesday afternoon.

He later tweeted: “Good meeting with President Trump – he really believes in Brexit and is loving his trip to London.”

Farage has campaigned for years to take Britain out of the European Union and is one of Trump’s most prominent British supporters. The president has called Farage a friend.

Farage’s newly founded Brexit Party was the big winner in last month’s European Parliament elections in Britain, scooping up support from voters angry that the U.K. has not left the EU.

He has criticized Prime Minister Theresa May’s divorce deal with the bloc and said Britain should leave the EU without an agreement.

Trump praised May’s handling of Brexit on Tuesday, saying she had gotten a good deal.

President Donald Trump has reiterated his opinion that Boris Johnson would make a good U.K. prime minister and has praised another contender for the job, Foreign Secretary Jeremy Hunt.

Johnson and Hunt are among a dozen Conservative lawmakers running to succeed Prime Minister Theresa May, who is due to step down as party leader on Friday after failing to deliver Brexit. The winner of the party leadership contest will become Britain’s next prime minister.

Hunt greeted Trump when he landed at Stansted Airport on Monday, and British media reported that Johnson and the president spoke by phone on Tuesday.

Gove has met Trump, interviewing him for the Times of London in 2017.

President Donald Trump has dialed back on past criticism of Prime Minister Theresa May’s Brexit negotiating skills, saying she got a good divorce agreement with the European Union.

Trump previously said May should have taken his advice to sue the bloc. At a news conference with May in London on Tuesday, Trump said he would have “sued and settled, maybe, but you never know. She’s probably a better negotiator that I am.”

Trump said May’s agreement was a good one and told her “perhaps you won’t be given the credit you deserve.”

May is stepping down as Conservative Party leader on Friday, after Parliament three times rejected her EU divorce deal.

May says she still believes the agreement is the right one for Britain but it will be for whoever succeeds her “to take this issue forward.”

President Donald Trump is predicting the eventual passage of a Brexit deal.

Trump said during a joint press conference with British Prime Minister Theresa May in London on Tuesday that he “would say that it will happen and that it should happen.” He says he believes it “will be good for the country.”

May will be stepping down as Conservative leader on Friday after failing to secure a deal on the U.K.’s exit from the European Union. Britain’s Parliament voted not to leave the EU without a deal but three times rejected May’s attempts.

Still, May says it’s in the U.K.’s best interest to deliver.

Trump previously criticized May over her handling of the issue but said Tuesday she deserves “a lot of credit.” He says he thinks May has “done a very good job.”

President Donald Trump says he sees “no limitations” on the future sharing of intelligence with the U.K. as the U.S. continues to press its longtime ally to ban Chinese company Huawei (WAH’-way) amid espionage and trade concerns.

Trump says that the issue came up during his meetings Tuesday with outgoing Prime Minister Theresa May but that they’re “going to absolutely have an agreement on Huawei and everything else.”

Amid escalating trade tensions with China, the Trump administration has launched a global effort to keep Huawei from controlling future 5G telecom networks, citing cybersecurity threats from the Chinese firm.

Last month, Trump took long-anticipated steps to keep Huawei out of the U.S. market, with the worldwide campaign focused on major intelligence partners.

President Donald Trump has described the thousands of people who demonstrated in London against his visit to Britain as a “small protest.”

Trump says he saw only a small demonstration and says media reports of the much larger protest are “fake news.”

Trump said at a news conference on Tuesday with Prime Minister Theresa May that he doesn’t know Labour Party leader Jeremy Corbyn, who was among thousands of demonstrators expressing noisy opposition to Trump’s visit.

Trump says Khan has not been a very good mayor and should focus on his job.

Khan says he’s not interested in having a “childish playground fight” with Trump.

President Donald Trump says the United States is committed to a “phenomenal” trade deal with Britain as it prepares to leave the European Union.

At a news conference with May in London on Tuesday, Trump restated his desire for a U.K. trade deal, saying there is “tremendous potential.”

Trump says the two countries could do two to three times that amount of trade they’re currently conducting.

British Prime Minister Theresa May has praised the “precious and profound” U.S.-U.K. special relationship but acknowledged differences with President Donald Trump on issues including climate change and Iran.

Speaking alongside Trump at a news conference in London on Tuesday, May mentioned Britain’s continued support for the Paris agreement on climate change, which Trump has repudiated. And she says the two nations differ on how to limit the threat from Iran.

The U.K. still supports an international agreement to curb Tehran’s nuclear ambitions, but Trump has withdrawn the U.S. from the deal.

May also told the nationalist president that “cooperation and compromise are the basis of strong alliances.”

London Mayor Sadiq Khan says he’s not interested in having a “childish playground fight” with President Donald Trump despite harsh words exchanged between them in recent days.

Khan told The Associated Press on Tuesday that his verbal clash with Trump has to do with standing up for values traditionally associated with the United States and its Founding Fathers.

Khan says America is built on religious freedom and equality and has long served as a “beacon to the rest of the world.” Khan says Trump instead is serving as a “poster boy” for many far right politicians including those in Hungary, Italy and France.

The topper was Eton Mess, a sweet English original confection popular since the late 19th century and thought to have originated at the elite Eton College.

It usually consists of mushed up strawberries, broken meringue, and whipped double cream. In this case it was topped with peaches.

The two couples also viewed the Sussex Declaration, a rare copy of the American Declaration of Independence.

President Donald Trump is meeting with British Prime Minister Theresa May at 10 Downing St. in London.

May and her husband. Philip, greeted Trump and first lady Melania Trump and the foursome posed for photographs. Protesters demonstrating against Trump’s visit gathered up the street.

May is to step down Friday as head of her Conservative Party over her failure to secure Britain’s exit from the European Union.

The leaders are discussing a possible bilateral trade deal to take effect once the U.K. leaves the European Union and Britain’s decision about whether Chinese telecoms firm Huawei can work on parts of the country’s new 5G wireless communications network. The U.S. wants allies to exclude Huawei from all 5G networks over fears it could let the Chinese government gain access to data.

Relations with China will be on President Donald Trump’s agenda during his meetings Tuesday with British Prime Minister Theresa May.

British officials are considering whether to let Chinese telecoms firm Huawei work on parts of the country’s new 5G wireless communications network. The United States has been lobbying allies to exclude Huawei from all 5G networks over fears it could let the Chinese government gain access to data or conduct espionage.

U.K. Security Minister Ben Wallace says the government hasn’t made a final decision, but that Huawei should be given a chance because the British “believe in fair play.”

But former Foreign Secretary William Hague wrote in the Daily Telegraph that Washington wants the U.K. to join the United States in adopting a more comprehensive ban.

The White House says U.S. President Donald Trump and the first lady have given Queen Elizabeth II a silver and silk poppy flower brooch from Tiffany & Co. The brooch was wrapped inside a custom White House jewelry box.

The president and first lady exchanged gifts with the queen as part of their state visit in the United Kingdom.

The president and first lady gave Prince Philip a personalized Air Force One jacket and a first edition signed autobiography by James Doolittle entitled: “I Could Never Be So Lucky Again.”

President Donald Trump is telling British Prime Minister Theresa May that she should “stick around” so that the U.S. and Britain can do a trade deal.

The two are meeting in London, just days before May is to step down as party leader Friday, setting in motion a race to succeed her as prime minister.

The leaders’ top priority is a possible bilateral trade deal to take effect once the U.K. leaves the European Union.

Before their meeting with business leaders, May says the two nations’ business relationship can be enlarged and a trade deal can be fair for both sides.

Trump told May “Let’s do this deal.”

President Donald Trump and British Prime Minister Theresa May are meeting with corporate executives from the United States and United Kingdom. The leaders’ top priority is a possible bilateral trade deal to take effect once the U.K. leaves the European Union.

The meeting with business leaders at St. James’s Palace brings together nearly a dozen leading companies from the UK and the United States.

Just up the street, protesters leaders of Britain’s political opposition will be joining demonstrators. They are inflating a blimp depicting Trump as a giant screaming baby to protest his visit.

Trump has dined with Queen Elizabeth II at Buckingham Palace and taken tea with Prince Charles on his pomp-filled trip to the U.K.

Things are likely to become more awkward on Tuesday when he meets May, who is in the final weeks of her premiership. The two leaders have sharply differing views on issues including Iran, Brexit and Chinese telecoms firm Huawei.

President Donald Trump will turn from pageantry to policy Tuesday as he joins British Prime Minister Theresa May for a day of talks likely to highlight fresh uncertainty in the allies’ storied relationship.

Trump and May are due to meet with corporate executives from the United States and United Kingdom, before an afternoon news conference on the second day of Trump’s state visit. The leaders’ top priority is a possible bilateral trade deal to take effect once the U.K. leaves the European Union.

Britain is scheduled to leave the EU on Oct. 31 unless both sides agree to an extension. Its position is in flux because May is stepping down as party leader Friday, setting in motion a race to succeed her as prime minister.