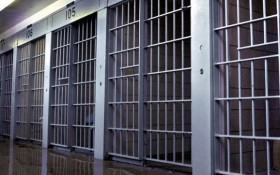 A prison break attempt straight out of the movies! Two inmates at a Louisville, KY, jail could have used a course in knot-tying when authorities say they plotted an escape using bed sheets.

Officials say the men escaped to the roof of a minimum-security building Monday night and used a rope made of bed sheets to climb down about four floors. Metro Corrections Director Mark Bolton says 29-year-old Matthew Johnson was climbing down when a knot on the sheets came loose, dropping him about 20 feet. He then fled.

Police learned of the escape around 9 p.m., when a hospital worker spotted Johnson climbing down.

The second inmate, 37-year-old Christopher Cornelius, didn’t risk the climb and was found on the roof.

Bolton says Johnson was found hiding in a car during a traffic stop early Tuesday morning. He injured his ankle and back and remained hospitalized Tuesday.

Both men were in jail on drug charges.