The greatest ever, Pele dead at 82 - The Horn News 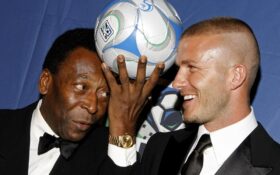 Pelé was remembered for a life beyond the field, for transcending the sport of soccer and becoming perhaps the most well-known person on Earth.

“Before Pelé, ’10′ was just a number,” current Brazil forward Neymar wrote following the soccer great’s death Thursday at the age of 82. “That line, beautiful, is incomplete. I would say that before Pelé soccer was just a sport. Pelé changed everything. He transformed soccer into art, entertainment. He gave voice to the poor, to the Black and above all he gave Brazil visibility. Soccer and Brazil elevated their standing thanks to the King! He is gone, but his magic will endure.”

Pelé scored 12 goals in 14 World Cup matches and is the only three-time world champion, winning titles in 1958, 1962 and 1970. His death was especially impactful for generations of Brazilian players who idolized him.

“Today Brazil waves goodbye to one of its most illustrious children,” wrote Romario, a 1994 World Cup champion who used Pelé’s full name in his post. “Edson Arantes do Nascimento made the world bow to his talent and took Brazilian soccer to the altar of gods. Throughout his life, Pelé inspired generations of athletes and deserves every tribute.”

“What a privilege to come after you, my friend,” Ronaldo wrote. “Your talent is a school through which every player should go. Your legacy transcends generations. And that is the way you will continue to live.”

Pelé was a revered sports figure to a level probably not comparable to any athlete other than Muhammad Ali. As comfortable mingling with heads of states and celebrities as he was evading defenders, Pelé made an impact in capitals across continents.

“As one of the most recognizable athletes in the world, he understood the power of sports to bring people together,” former U.S. President Barack Obama wrote.

President Joe Biden tweeted: “For a sport that brings the world together like no other, Pelé’s rise from humble beginnings to soccer legend is a story of what is possible.”

Pelé’s greatest impact was in Brazil, a unifying figure celebrated during the 2014 World Cup.

“I saw Pelé play, live, at Pacaembu and Morumbi (stadiums),” former Brazil President and current President-elect Luiz Inácio Lula da Silva wrote. “Play, no. I saw Pelé give a show. Because when he got the ball he always did something special, which often ended in a goal. … Few Brazilians took the name of our country as far as he did. As different from Portuguese as one’s language was, foreigners from the four corners of the planet soon found a way to pronounce the magic word: ‘Pelé.’”

For a half-century, people who knew the name of only one soccer player knew Pelé.

“He made people dream and continued to do that with generations and generations of lovers of our sport,” France coach Didier Deschamps said in a statement. “Who, as a child, didn’t dream of being Pelé? … Pelé was the alliance of beauty and efficiency. His talent and his list of achievements will stay engraved in our minds forever.”

French soccer star Kylian Mbappé tied Pelé for sixth in career World Cup goals with a hat trick in this month’s loss to Argentina in the final. Four years ago, Mbappé became only the second teenager — after Pelé — to score a goal in a World Cup final.

“The king of football has left us but his legacy will never be forgotten,” Mbappé wrote.

“Pelé not only filled football stadiums with exhilaration but he filled hearts and homes with hope and the knowledge that adversity was surmountable,” South African President Cyril Ramaphosa said in a statement Friday. “His endurance and impact on the field of play inspired the resilience with which Pelé worked for peace and justice globally.”

When Pelé’s condition worsened last month during the World Cup in Qatar, get well messages were flashed on the sides of buildings in Doha. The English Football Association lit Wembley Stadium’s arch in Brazil’s colors on Wednesday night. FIFA, soccer’s governing body, changed its website’s homepage to photos of Pelé with a black background.

“Pelé did things that no other player would even dream of,” FIFA president Gianni Infantino wrote. “The sight of him punching the air in celebration is one of the most iconic in our sport, and is etched into our history. In fact, because televised football was still in his infancy at the time, we only saw small glimpses of what he was capable of.”

When Pelé played for the New York Cosmos of the North American Soccer League from 1975-77, he helped spark soccer’s rise in the United States, leading to the nation hosting the World Cup in 1994.

“Pele was truly a remarkable figure — on and off the field,” said FIFA Council member Sunil Gulati, a former U.S. Soccer Federation president. “The world has lost a once in a lifetime sportsman who leaves an extraordinary legacy.”