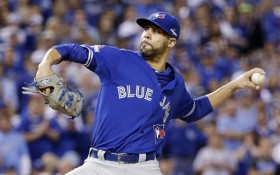 The Boston Red Sox and AL Cy Young runner-up David Price have agreed to terms on a seven-year free-agent deal worth $217 million, a person familiar with the negotiations told The Associated Press.

The person spoke on condition of anonymity Tuesday night because the deal — the largest ever for a pitcher — is pending a physical. It is expected to be announced on Friday, the person told the AP.

Choosing the Red Sox reunites Price with president of baseball operations Dave Dombrowski, who until this August was the Detroit Tigers’ general manager. Dombrowski has had a hand in all three of Price’s moves the past two years.

After spending his entire career in Tampa Bay, Price was acquired by Detroit at the 2014 trade deadline. A year later, the Tigers traded him to the Blue Jays at the July 31 non-waiver deadline and Price helped Toronto reach the playoffs for the first time since 1993.

Now he will try to help turn around a team that has finished last in the AL East in three of the last four seasons. (The Red Sox won the World Series in 2013.) On its way to a 78-84, last-place finish in 2015, Boston brought in Dombrowski and he quickly went to work rebuilding the once-proud ballclub.

And this week he got someone Kimbrel can save games for.

Price bolsters a rotation that has lacked an ace since the Red Sox balked at the asking price for Jon Lester, who signed a six-year, $155 million deal with the Chicago Cubs. Twelve different pitchers started at least one game for the Red Sox in 2015.

Price joins a rotation that, barring injuries and trades, is expected to include Wade Miley, Rick Porcello, Eduardo Rodriguez and Clay Buchholz. Joe Kelly, Steven Wright and Henry Owens could bolster the bullpen, fill in as starters or serve as trade bait.