The cowardly case of Sen. Ben Cardin - The Horn News 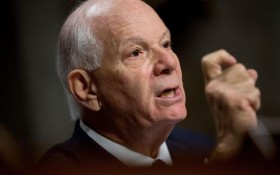 But pundits say what Cardin is really hoping is that President Barack Obama gathers enough votes to uphold a veto of a GOP bill opposing the deal without him, which would absolve Cardin of having to make a decision.

According to the Associated Press, Sen. Cardin on Tuesday told students at Johns Hopkins University that the numbers will favor the president when Congress votes later this month on GOP legislation disapproving of the deal.

Cardin said in a detailed question-and-answer session on the issue. “The president will… clearly get to the 34 number by the end of the week,” which would be enough to sustain a veto. As of last night, Senate support for the deal now stands at 33 votes, thanks to an announcement from Democrat Bob Casey of Pennsylvania.

Republicans unanimously oppose the deal that aims to curb Iran’s nuclear program in exchange for relief from economic sanctions.

“I think it’s a tough call and I sort of bristle when people say this is such an easy decision, why haven’t you made it. I don’t think it is an easy judgment call,” Cardin said. “I think there are high risks either way.”

Perhaps Cardin is just waiting to hear from his constituents?