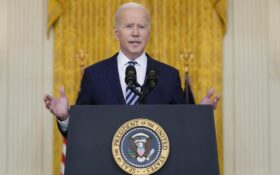 The administration of Joe Biden and Kamala Harris is sitting on one of the most enormous, wide-ranging cases of fraud in U.S. history — and, as usual, it’s trying to pin the blame on President Donald Trump.

The fraud is hidden in a pile of papers tied up with the government’s massive coronavirus stimulus plan, the Paycheck Protection Program (PPP).

The government forced businesses to close “to stop the spread” of the coronavirus, so it began giving out loans to business owners to tide them over. It wasn’t enough; at least 200,000 businesses closed, anyway, and just last June, 6.2 million people did not work or worked fewer hours because of the pandemic.

Still, the government considered the PPP a huge success… until word started to break out about the PPP’s corruption and fraud.

People turned in applications for businesses they made up out of thin air. They asked for cash to keep businesses open that had been closed long before the virus came to U.S. shores from China. Or real shops and stores lied about the number of people working for them.

PPP was designed as a government-financed “loan” so that businesses—who closed their doors, as the government forced some of them to do—could keep paying their employees’ salaries. The feds handed out taxpayers’ money like candy—even worse than usual—and they didn’t ask too many questions along the way.

The Small Business Administration, which was put in charge of administering all PPP loans, says it didn’t have the resources to check on every bricklayer in New Jersey or roofer in Omaha. They just wanted to get the money out.

But now, they’re trying to get the money back… and they have their empty hands full chasing after all the money they handed out to fraudsters.

A 63-year-old man in St. Petersburg, Florida, got an $800,000 check from SBA to keep running a business that didn’t actually exist.

A 49-year-old Kentucky man eventually pleaded guilty to shaking down Uncle Sam for $1.3 million in phony PPP loans to finance four businesses that he created on paper. He claimed he had enormous payroll expenses, when he really had none at all.

A 51-year-old woman in New Jersey is accused of cheating the government out of $1 million in PPP funds for “employees” she made up. Prosecutors say she even ran phony tax documents to make the employees seem real.

Those are just the fraudsters that were caught. It’s a huge black eye for the Biden administration, which always said the government wasn’t handing out enough money to people during the days of COVID. They gave extra unemployment benefits and other perks long after the COVID-19 death toll started to fall…and, if they get their way, they’ll pass out billions more in welfare yet.

So, what does Biden do when he gets bad news? Blame Donald Trump.

Another Biden administration apologist named Han Nguyen said in a statement that he and other Biden officials have been “working since its outset to address fraud concerns we inherited from the Trump Administration and to ensure the sound administration of pandemic relief programs.”

There’s no doubt some fraud happened under Donald Trump—just like other kinds of fraud happened under Barack Obama, George W. Bush, and Bill Clinton. But Biden and Harris can’t lay all this at the feet of their predecessor; any child could see that handing out government checks would tempt dishonest Americans to game the system.

“I’m not surprised… it was ripe for fraud,” Kentucky businessman Dave Christopher, of the Russell Tech Business Incubator, told a local news station in December. “It was set up for people with power to get more power.”