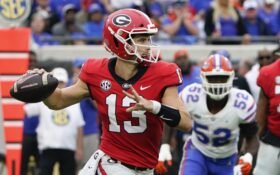 Line: Georgia by 8 1/2, according to FanDuel Sportsbook.

Here’s what you need to know —

The winner will certainly claim rights to the No. 1 spots in the College Football Playoff rankings and Associated Press Top 25. Also at stake is command of the SEC East and a lead in the race for a spot in the conference championship game in Atlanta.

Tennessee’s up-tempo offense against Georgia’s stingy defense. The Volunteers lead the nation in scoring (49.4 ppg), total offense (553 ypg) and a 198.51 passing efficiency. They’ve scored at least 30 points in an SEC-best 11 straight games, a school record. Georgia ranks second in the nation in scoring defense (10.5 ppg). The Bulldogs are fourth in total defense (262.6 ypg) and fifth against the run (85.5 ypg).

Tennessee: QB Hendon Hooker. He’s vaulted up the ranks from Heisman Trophy contender to favorite, a status Hooker can cement with a strong performance against this defense. He set the school record last week with a TD pass in his 20th straight game. He leads the SEC with a 191.64 passing efficiency and has been intercepted only once this season in 219 pass attempts, snapping a streak of 261 straight passes that started last November when picked off by Georgia.

Georgia: TE Brock Bowers is the nation’s only player to have scored touchdowns with a run and a reception of at least 75 yards. Bowers has 31 catches for a team-leading 547 yards and three touchdowns. He has been named the SEC’s offensive player of the week twice.

This is the 25th regular-season game matching No. 1 and No. 2 teams in the AP Top 25. Of those matchups, it is the third straight involving SEC teams. The other two games featured LSU and Alabama in 2011 and 2019.

This is the first matchup of No. 1 and No. 2 teams in Sanford Stadium history.

Tennessee WR Jalin Hyatt has nine catches of 40 yards or longer, the most in the nation. That is more than 117 FBS teams, including 12 in the SEC.

The Bulldogs’ streak of 16 consecutive SEC regular-season wins also is the second-longest in school history, behind their 23 from 1980-83.

Georgia is 35-4 at Sanford Stadium since Kirby Smart took over as coach in 2016.