The Beatles' record was just tied by... - The Horn News 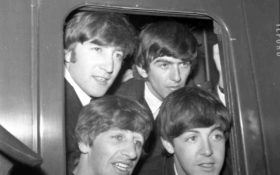 In 1964, The Beatles shocked the record industry by filling each of the top five spots on the Billboard Hot 100 chart.

Now, a newer artist has just tied that record… and made one of her own.

Pop star Taylor Swift scored a 10 out of 10 as she became the first artist in history to claim the top 10 slots of the Hot 100 with tracks from her new record “Midnights.”

Even before Swift, the recording artist Drake had tied The Beatles’ record last year. It’s not possible to break the record because there are only five spots in the top five.

Drake also set his own record at the time. He held nine of the top 10 songs for a week in September 2021, Billboard reported.

Now, Swift has set another record even more momentous than Drake’s.

Since the 2010s, the Hot 100 has used a new formula different than its formula from The Beatles’ heyday. In 1967, only retail singles could appear on that chart, and no tracks from “Sgt. Pepper’s Lonely Hearts Club Band” were released as retail singles.

However, the chart can now include any track from an album. It takes into account not only radio airplay and physical sales, but also streams and digital sales.

Swift’s album came out Oct. 21 with both a 13-track standard release and a deluxe version with another seven bonus tracks. It has had one of the biggest album launches in nearly seven years. Billboard also reported that Swift now ties with Barbra Streisand for the female artist with the most No. 1 albums.

The No. 1 spot belongs to “Anti-Hero,” whose lyrics “It’s me/hi/I’m the problem/It’s me” have quickly become a TikTok trend. The other top 10 songs include “Lavender Haze,” “Maroon,” “Snow on the Beach,” “Midnight Rain,” “Bejeweled” and ”Question…?”