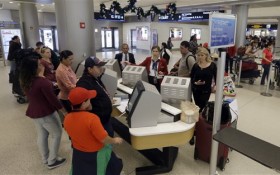 During the long holiday weekend, 46.9 million Americans are expected to go 50 miles or more from home, the highest number since 2007, according to travel agency and car lobbying group AAA. That would be a 0.6 percent increase over last year and the seventh straight year of growth, leading to more traffic.

Like on every other holiday, the overwhelming majority of travelers — almost 90 percent — will be driving. And they will be paying much less at the pump.

AAA says the average retail price for gasoline is now $2.15 per gallon, 74 cents cheaper than the same time last year. With the average car getting 18.5 miles per gallon, that means a family driving 300 miles will save $12 in fuel this holiday.

Airlines for America forecasts 25.3 million passengers will fly on U.S. airlines, up 3 percent from last year. (AAA’s forecast shows fewer numbers of fliers because it looks at a five-day period while the airline group looks at the 12 days surrounding Thanksgiving.)

Airfare is basically flat compared to last year, with a mere 0.3 percent or 69 cent average increase, according to the Airlines Reporting Corp., which processes ticket transactions for airlines and travel agencies.

Traveler counts are little fuzzier when it comes to other forms of transport.

Bus use will continue to grow, according to the Chaddick Institute for Metropolitan Development at DePaul University. The school expects 1.2 million to take buses, up 1 percent to 2 percent from last year. However, AAA says travel by cruises, trains and buses, will decrease 1.4 percent this Thanksgiving, to 1.4 million travelers.

Since flying can often cause the most disruptions and leave travelers feeling helpless, here are some tips to cope with any delays. Flights are packed around the holidays and if there is any hiccup, the difference between getting home and not can come down to asking the right questions and acting fast.

— At the first sign of a serious mechanical problem, call the airline to have it “protect” you on the next flight out. That way if the mechanical problem leads to a cancellation, you are already confirmed on a new flight and can just print a new boarding pass.

— If you miss your flight connection — or bad weather causes delays — get in line to speak to a customer service representative. But also, call the airline directly. If the phone lines are jammed, try the airline’s overseas numbers. You’ll pay long-distance rates, but might not have to wait. (Add those numbers to your phone now.) Finally, consider sending a tweet to the airline.

— Consider buying a one-day pass to the airline lounge. For one thing, there are usually free drinks and light snacks. But the real secret to the lounges is that the airline staffs them with some of its best — and friendliest — ticket agents. The lines are shorter and these agents are magically able to find empty seats. One-day passes typically cost $50 but discounts can sometimes be found in advance online.

— Weigh it at home first. Anything over 50 pounds (40 pounds on some airlines like Spirit) will generate a hefty overweight surcharge, in addition to the checked bag fee.

— Before your bag disappears behind the ticket counter, make sure the airline’s tag has your name, flight number and final destination. Save that sticker they give you — it has a bag-tracking number on it.

— Place a copy of your flight itinerary inside your suitcase with your cellphone number and the name of your hotel in case the tag is ripped off.

— If you can’t live without it, don’t check it. It might take days to return a lost bag. Don’t pack medication or outfits for tomorrow’s meeting or wedding. Never check valuables such as jewelry or electronics.

— Prepare your carry-on bag as if it will be checked. You might not have planned to check your bag, but given today’s crowded overhead bins many fliers don’t have a choice. Pack a small canvas bag inside your carry-on so if you are forced to check it, you can at least keep your valuables with you.

— Set up alerts for seat openings. ExpertFlyer.com offers free notifications when a window or aisle seat becomes vacant. For 99 cents, it sends an email if two adjacent seats become available. The service is available for Alaska Airlines, American Airlines, JetBlue Airways, United Airlines and Virgin America but not for Delta Air Lines and some smaller carriers.

— Check the airline’s website five days before the trip. That’s when some elite fliers are upgraded to first class, freeing up their coach seats. Another wave of upgrades occurs every 24 to 48 hours.

— Check in 24 hours in advance when airlines start releasing more seats. If connecting, see if seats have opened up 24 hours before the second flight departs.

— Keep looking for new seats. Even after checking in, seats can be changed at airport kiosks and on some airlines’ mobile applications.