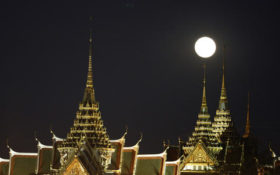 No, English speakers and others using the Roman alphabet aren’t going to have to start calling the Thai capital by its local name, Krung Thep Maha Nakhon, and drop the more familiar “Bangkok.”

That’s the message from Thailand’s Royal Society, which is responsible for academic and linguistic standards, after a seemingly innocuous change in punctuation in official guidance sparked a flurry of speculation that the city’s name was being changed.

As people sought to divine the meaning behind changing the semicolon to parentheses, many put great weight to the accompanying explanation that it would “revise” the name of the capital city and keep the “former” name in brackets.

The capital is already officially known in the Thai language as Krung Thep Maha Nakhon, which literally means “great city of angels,” and most Thais shorten it to just Krung Thep in conversation.

As speculation grew, the Royal Society on Wednesday clarified in a Facebook post that their new guidance was simply a stylistic change.

“Writing the capital city’s official name with the Roman alphabet can be done both as Krung Thep Maha Nakon and Bangkok,” the government agency said, allaying the fears of any non-Thai speakers about adopting the more complicated name.

Even if the Royal Society had meant to change the name to the one used by Thais, however, there is another option that would have been an even greater challenge for foreign tongues.

The Thai name for Bangkok, Krung Thep Maha Nakhon, is actually a short form of the capital’s full name, which is rooted in Pali and Sanskrit and is more of a phrase to describe the city than a name: Krung Thep Mahanakhon Amon Rattanakosin Mahinthara Ayuthaya Mahadilok Phop Noppharat Ratchathani Burirom Udomratchaniwet Mahasathan Amon Piman Awatan Sathit Sakkathattiya Witsanukam Prasit.

That is the world’s longest place name, according to the Guinness World Records.

The Associate Press contributed to this article.