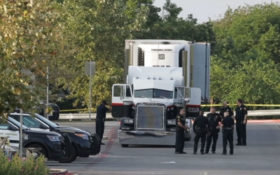 A South Texas sheriff says the discovery of 86 immigrants in the back of a tractor-trailer represents one of the largest cases of human trafficking he’s encountered in more than 30 years.

Willacy County Sheriff Larry Spence told The Monitor newspaper Wednesday that some inside the trailer punched a hole in the roof to escape when the rig was pulled over.

The U.S. Border Patrol says a Texas trooper stopped the tractor-trailer late Tuesday near Raymondville, about 40 miles from the border, following a call about suspicious activity.

Authorities say the people entered the country illegally and came from Guatemala, Honduras and other countries. The youngest was 3 years old.

They were hiding behind crates of rotten produce.