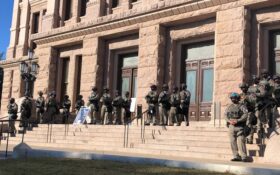 In early July, the Texas House of Representatives was considering a voter integrity bill.

Facing defeat, the state’s House Democrats fled for Washington, D.C. instead of voting on the bill that would soon pass. Too many representatives had left the state, and the House was unable to convene. Rules state a certain number of lawmakers must be present to vote on anything — called a quorum.

They got some bad news this week. The Texas Supreme Court has ruled that the absent Democrats can be arrested, to be brought back to the state Capitol in Austin by force.

A judge in Travis County, the site of Austin, had previously blocked the state from arresting the lawmakers. Texas Gov. Greg Abbott (R) and Texas House Speaker Dan Phelan (R) filed a motion in the Texas Supreme Court. They argued for the high court to overturn the lower court’s ruling, and the court complied after only a few hours.

Abbott’s spokesperson Renae Eze told The Hill that the court “swiftly rejected this dangerous attempt by Texas Democrats to undermine our Constitution and avoid doing the job they were elected to do.”

“We look forward to the Supreme Court upholding the rule of law and stopping another stall tactic by the Texas Democrats,” she continued.

The Democrats’ obstructive maneuver was cheered on by many high-profile Democrats, including Vice President Kamala Harris.

While in Washington, the Texas Democrats met with some high-profile politicians, like Vice President Harris and Senate Majority Leader Chuck Schumer.

The @VP gets a standing ovation from Texas legislators visiting Washington, the group that flew here last night to break quorum in their home state and block passage of voting restrictions. pic.twitter.com/e1t4gopfhh

Some Democrats were trickling back into Austin even before the ruling, but the state legislature still came up short of the 100-member threshold needed to end the deadlock.

One Democrat, Representative Carol Alvarado (D), stayed in Austin to filibuster the bill for 15 hours.

The election integrity bill, formally titled Senate Bill 1, ultimately passed on Aug. 12, two days after the court’s ruling. It will ban outdoor voting, straight-ticket voting, and 24-hour voting centers. It will also limit the use of ballot drop boxes, which have been used because of the pandemic.