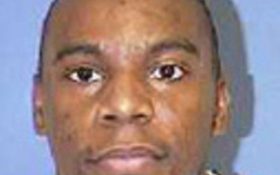 A Texas death row inmate was set to die by lethal injection Tuesday evening for the fatal shooting more than 25 years ago of a newlywed who was attacked as he and his wife walked on a jogging trail.

Alvin Braziel Jr. would be the 24th inmate put to death this year in the U.S. and the 13th executed in Texas, which is the nation’s busiest capital punishment state. He would be the last Texas inmate executed this year.

Braziel, now 43, was sentenced to death for the slaying of 27-year-old Douglas White as he and his wife Lora White walked along a community college jogging trail in 1993 in the Dallas suburb of Mesquite.

The Whites had been married for only 10 days when Braziel jumped out from behind some bushes with a pistol in his hand and demanded money.

The couple didn’t have any money on them but told Braziel they could get him some and they started walking back to their truck. But Braziel became angry with them and ordered them to the ground.

“Doug … was praying, asked God to forgive him and Lora for their sins because they both knew that this was it,” said Michael Bradshaw, who was the lead detective who investigated the case for Mesquite police. “The last thing Doug said before Braziel fired the first round, he said, ‘Please God, don’t let him hurt Lora.’”

Braziel shot White once in the head and once in his heart.

Bradshaw said he believes Braziel would have also fatally shot then-24-year-old Lora White but his gun malfunctioned. Braziel took her to a bushy area near the trail instead and sexually assaulted her.

Douglas White’s killing was featured on the television show “America’s Most Wanted” and a $20,000 reward was raised by the chiropractic college he had worked for as an electrician. Bradshaw said more than 40 potential suspects were interrogated and had their blood drawn for testing.

Still, the slaying remained unsolved for more than seven years.

“I really didn’t know that I would ever be able to solve it. But I really did not give up hope,” said the 63-year-old Bradshaw, who retired from Mesquite police in 2012.

Braziel was eventually tied to the killing in 2001 after he was imprisoned for sexual assault on an unrelated case and his DNA matched evidence from Lora White’s assault.

At his trial, Braziel said he wasn’t near the college during the killing.

Last week, his lawyers asked the Texas Court of Criminal Appeals to stop his execution, arguing in part he should not receive a lethal injection because he is intellectually disabled.

The Supreme Court held in 2002 that people convicted of murder who are intellectually disabled cannot be executed.

Braziel’s attorneys have since withdrawn their request and no other appeals were pending in either state or federal court.

Bradshaw said he still keeps in contact with Lora White and that she started a new life and is doing well.

“Lora wants it known that she’s prayed for Alvin Braziel and his family. And she also prays that Alvin has accepted Jesus Christ as his Lord and savior and (he) asks forgiveness for all the evil things that he’s done,” Bradshaw said.