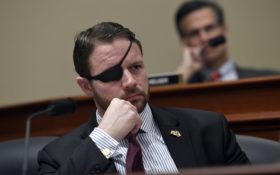 Rep. Dan Crenshaw, a Texas Republican, said Saturday that he has undergone eye surgery and is completely blind.

Crenshaw, 37, is a Navy veteran who lost his right eye and suffered damage to his left eye in 2012 when a homemade bomb exploded when he was deployed to Afghanistan.

“The blast from 2012 caused a cataract, excessive tissue damage, and extensive damage to my retina,” Crenshaw said in a statement. “It was always a possibility that the effects of the damage to my retina would resurface, and it appears that is exactly what has happened.”

Crenshaw said the retina to his left eye was found to be detaching after he went to an ophthalmologist on Thursday because of dark, blurry vision, and that he underwent surgery on Friday.

“The surgery went well, but I will be effectively blind for about a month,” according to Crenshaw.