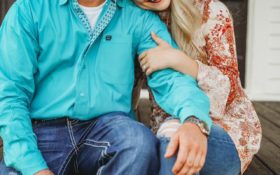 Family members say a Texas couple was killed in a helicopter crash just hours after they were married.

Houston TV station KTRK reports that Will Byler and Bailee Ackerman were married Saturday night at a ranch in Uvalde, about 80 miles (125 kilometers) west of San Antonio. Byler’s grandfather, William Byler, tells the TV station that the couple died when a helicopter that had departed the wedding reception crashed.

The TV station reports that the helicopter’s pilot was also killed in the crash. The National Transportation Safety Board says it’s investigating the crash and the cause is not yet known.

The Houstonian student newspaper reports that the newlyweds were seniors at Sam Houston State University.