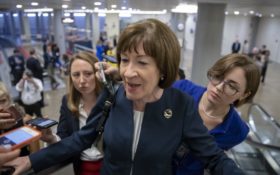 A hazardous materials team was dispatched to the home of Republican Sen. Susan Collins on Monday after her husband received a letter with a note saying the envelope contained ricin.

The FBI said preliminary tests on the letter and its contents indicated that there was no threat to the public, and the senator and her husband were allowed to stay in the home Monday night.

It was unclear who sent the letter and why. But critics have hurled threats at Collins and her staff over her vote to confirm Brett Kavanaugh to the U.S. Supreme Court.

“Today’s incident is the latest in a series of threats against Senator Collins, her loved ones, and her staff,” said Annie Clark, the senator’s spokeswoman.

The senator’s husband, Thomas Daffron, was at home when the letter arrived on Monday, but Collins wasn’t there.

Police and fire vehicles were parked outside her home, and several people in hazmat suits were seen going inside. Yellow police tape was wrapped around the property’s perimeter.

Outside the house, a Bangor Daily News photographer captured an image of a person in a hazmat suit holding an envelope in a plastic bag. Later, the FBI arrived, along with vans carrying people in military uniforms, the newspaper reported.

Collins issued a statement expressing her thankfulness for the professionalism of first responders and other agencies participating in the investigation.

“Our friends and neighbors have been incredibly kind and have even offered to open their homes to us. We feel blessed to live in such a supportive community,” she said.

The investigation into the letter, its contents and origin was continuing.

Independent Sen. Angus King of Maine, who voted against Kavanaugh, came to his fellow senator’s defense.

“Regardless of any political differences, @SenatorCollins, her family, and her staff should not have to be subjected to these threats — there’s just no place for it in our discourse,” he tweeted.

This is not who we are – as a state or as a nation. Regardless of any political differences, @SenatorCollins, her family, and her staff should not have to be subjected to these threats – there’s just no place for it in our discourse. https://t.co/K0Xq7qygrb #mepolitics