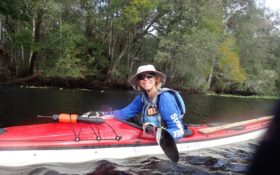 Floridian Judy Perkins was told by doctors that she had three months left to live after her breast cancer had advanced and spread to other parts of her body. Her cancer was not responding to conventional treatment, and tumors the size of tennis balls had taken up residence in her liver and chest.

“I came to realize that I was going to die, and that’s where my mind was,” Judy told CBS. She had just months to live.

But that was two years ago.

Today, Judy is cancer free thanks to an experimental cancer therapy made especially for her.

The treatment uses her body’s natural defenses to attack cancerous cells. A team of doctors examined Judy’s cells to find out which white blood cells already in the body were most effective at fighting her tumors. These are then multiplied and injected along with other drugs that help the immune system.

“About a week after [the therapy] I started to feel something,” Judy said. “I had a tumor in my chest that I could feel shrinking. It took another week or two for it to completely go away.”

Dr. Rosenberg admits that the therapy needs more research, but he is greatly encouraged at the success Judy has had.

“At lot of works needs to be done, but the potential exists for a paradigm shift in cancer therapy – a unique drug for every cancer patient – it is very different to any other kind of treatment,” he said.

Cancer researchers will likely have more success as President Trump has recently signed a bill allowing terminally-ill patients to try experimental treatments not yet approved by the FDA, like Judy’s treatment.