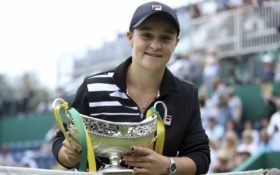 Australia’s greatest female tennis players, Margaret Court and Evonne Goolagong Cawley, have joined in celebrating the rise of compatriot Ashleigh Barty to the No. 1 world ranking which they both held.

Barty became the first Australian woman in more than 40 years to take the top ranking by claiming her third title of 2019 on Sunday in Birmingham. Her mentor and idol Goolagong Cawley, who won seven grand slams, was the first in 1976. The WTA rankings were introduced in 1973.

“In 2019, with all the pieces in place, her rise has been almost unstoppable,” Goolagong Cawley said in a statement on Monday. “Ash is a very worthy No. 1 and winning at the French will have given her even more confidence.

“I am so proud that another Aboriginal player sits on top of the rankings in women’s tennis, particularly a young lady who conveys such happiness in all she does.”

Court, who won 24 grand slams, said the challenge for Barty was to stay at No. 1.

“It was always easier climbing up the ladder than staying there,” Court said. “That’s a real champion — to stay at the top.”

Compatriot Sam Stosur, who won the 2011 U.S. Open, said Barty’s attitude will serve her well as she goes into Wimbledon next week as the top seed.

“She is playing fantastic and grass is a surface that she openly says she can’t wait to get on every year,” Stosur said. “I don’t think she went to the French thinking she had a shot which is maybe why she went there and put no pressure on herself.

“She was just playing it and enjoying it and getting through the rounds and suddenly she’s won a grand slam.

“Wimbledon will be a different scenario.”

“The top women players aren’t used to the type of game that she has,” Tiley said. “That’s what is putting her at a high level quickly – while the other players figure out how to play her I think they will continue to struggle.”

“With incredible versatility, perseverance, and focus, Ash Barty is an inspiration to the next generation of young players in Australia.