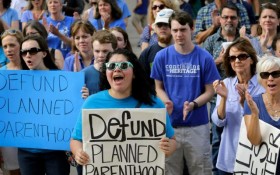 Tennessee has just potentially saved the lives of many babies by finally defunding Planned Parenthood and other abortion facilities in the state.

According to Live Action, “Tennessee Governor Bill Haslam signed a bill this week” and “will now request a federal waiver which allows them to bar TennCare, Tennessee’s Medicaid program, from giving money to any abortion facility.”

The bill passed through the legislative back in March, and at that time, the state finally realized that they had given the baby killers $1 million in only 6 years.

And for them, that meant enough is enough. It was time to direct their money elsewhere.

“The governor … deferred to the will of the legislature on this bill as amended, and after reviewing the bill in its final form decided to sign the bill into law,” said Jennifer Donnals, Haslam’s press secretary.

Rather than money being dispersed to abortion clinics, other health care providers will be provided funds.

“We have dozens of other medical clinics,” said Sen. Mike Bell, the bill’s sponsor. “This is not a cut. It is the policy of the state to favor childbirth as an integral part of the health and the welfare of the state.”

For Wallet to make such extreme accusations is off-base.”The Centers For Disease Control reported two years ago that in 2013, although only 13% of the American population is black, 35% of the babies murdered in abortions are black. In New York City, more black babies are aborted than are born.”

Planned Parenthood can continue their claims that women will die if they cannot have abortions, but the facts stand true — the clinic loves their women of color because they bring in more money.

So, Planned Parenthood could start receiving their funds again… if they stopped performing abortions.

The state of Tennessee has just scored another major win for conservatives — and for babies — now it is time for other states to follow in their footsteps.