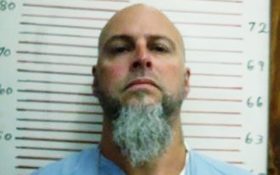 A Tennessee convict suspected of killing a corrections administrator before escaping prison on a tractor was captured Sunday seven hours after homeowners recognized him on their outdoor surveillance camera, authorities said.

Curtis Ray Watson put his hands up and was arrested as he came out of a soybean field Sunday in the west Tennessee community of Henning, Tennessee Bureau of Investigation Director David Rausch said at a news conference. The capture ended a five-day manhunt.

The field is 10 miles (16 kilometers) from the prison Watson escaped from Wednesday and near a home where he was seen on a surveillance camera earlier Sunday, Rausch said. The homeowners called police after one of them recognized Watson from police-issued photos.

Photos provided by the residents’ camera show Watson, 41, dressed in camouflage bib overalls and a hat and carrying a camp backpack. Dozens of officers mobilized in the area after the sighting.

“He had made the comment that he knew he wasn’t getting away because of the number of law enforcement,” Rausch said.

“I can assure you that our office will be resolved to see that he is put back where he can never escape again and harm anybody in our communities,” Davidson said.

Watson was on lawn mowing duty when the TBI says he sexually assaulted and strangled a Department of Corrections administrator employee at her home Wednesday at the West Tennessee State Penitentiary.

TBI said Watson escaped prison grounds, and the tractor was found nearby. Authorities launched an intense manhunt after Debra Johnson’s body was found with a cord wrapped around her neck Wednesday morning.

Rewards totaling $57,000 were offered for information leading to Watson’s arrest.

“Tremendous news that this fugitive is back in custody,” Tennessee Gov. Bill Lee said on Twitter.

Watson was discovered missing about 11 a.m. Wednesday, several hours after he was seen near the house where the 64-year-old Johnson lived on prison grounds.

According to a TBI affidavit, Watson had been released temporarily for mowing duties at 7 a.m. earlier that day, and had access to a golf cart and a tractor. As a “trusty” at the prison, he was allowed to use the equipment and had to wear a reflective vest while working on prison grounds.

Phone records show Johnson was talking on the phone at 8:10 a.m., just 20 minutes before corrections workers saw Watson in a golf cart at her house, according to the affidavit. He drove away from the prison sometime between 9 and 10 a.m. on a tractor, the affidavit said.

When Johnson didn’t show up for work, co-workers discovered Johnson’s body at her home at 11:30 a.m., according to the affidavit. The medical examiner declared her death a homicide by strangulation, the affidavit said.

Watson had been serving a 15-year sentence after pleading guilty to especially aggravated kidnapping in Henry County. Watson illegally confined his wife while using an aluminum baseball bat in July 2012, court documents showed. His sentence began in 2013 and was set to expire in 2025, officials said.

Watson had previously been convicted of aggravated child abuse in Carroll County. His sentence in that case expired in 2011, officials said.