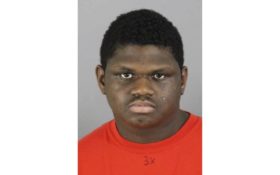 A Wisconsin teenager who was shot by a police officer after he allegedly pointed a pellet gun at another student’s head says he was “tired of being picked on,” according to criminal charges filed Monday,

Tyrone Smith, 18, was charged as an adult with several charges, including second-degree recklessly endangering safety,′ obstructing an officer, disorderly conduct and dangerous weapons on school premises.

Smith was 17 when authorities say he pointed the pellet gun at another student’s head at Waukesha South High School last week. A school resource officer helped clear students out of the classroom. A Waukesha police officer entered the room and shot Smith. Police say Smith pointed the gun at officers.

According to the complaint, Waukesha Police Officer Brady Esser, an 11-year veteran, told Smith: “I need you to take your hands out of your pockets very slowly with nothing in your hands, OK man?” Esser fired three shots, striking Smith. No other shots were fired.

Esser told a detective he had ordered Smith to remove his hands slowly from his sweatshirt pocket with nothing in his hands, but Smith removed his hands quickly and had a gun in his hands, according to the complaint.

“Sgt. Esser stated he feared for his life and was forced to shoot,” the complaint said.

According to the complaint, Smith denied bringing guns to school before that day and told investigators he was “tired of being picked on by other students.” Smith said he wanted to scare students who had picked on him — or might pick on him in the future — and that “other kids would hear about this and be scared,” the complaint said.

“Smith concluded by saying that he was sorry, and he knew it was wrong to bring a gun to school and he would not do it again,” the complaint said.

Smith is eligible for a public defender, and an attorney has not been appointed for him yet. He is due back in court Dec. 17.

The day after the Waukesha school shooting, Oshkosh West High School Resource Officer Mike Wissink shot and wounded a 16-year-old student Dec. 3 after the boy stabbed him in his office. Wissink was released from the hospital on Monday and received a police escort to the school, where WLUK-TV reports he was met with cheers from students and residents. No charges have been filed in that case.