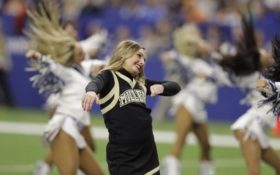 A teenage girl who was shot seven times at a central Indiana middle school has performed with Indianapolis Colts cheerleaders.

Ella Whistler danced with the cheer squad at Sunday’s game against the Miami Dolphins. The Indianapolis Star reports she also sang the national anthem with the school choir.

Ella Whistler shows the world how strong she is by performing with @ColtsCheer as our honorary captain for #MIAvsIND just 6 months after she was shot 7 times in the Noblesville West Middle School shooting. #EllaStrong pic.twitter.com/ynHIH1qzqn

Whistler and teacher Jason Seaman were shot at Noblesville West Middle School in May by a 13-year-old boy who later admitted to the shooting. Whistler’s family previously said she was shot in the face, neck and chest, and suffered collapsed lungs and several broken bones.

A judge ruled earlier this month that the boy should be held at a state juvenile detention center until he is 18 or deemed rehabilitated.