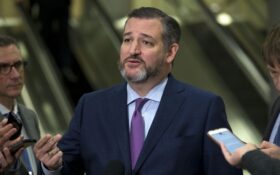 Cruz said the latest scandal from The Washington Post — which made up Trump quotes during his controversial phone call with Georgia’s Secretary of State Brad Raffensperger out of thin air — is proof the liberal media is forever changed.

“Senator, real quick, I want to get your take on The Washington Post correction this week and really look at how the media is driving this as well,” Bartiromo asked Cruz during his appearance Wednesday.

“I mean, we have the tape now, Senator, it said nothing of the sort. And, of course, this is very impactful because this was used as evidence at the impeachment trial against President Trump.”

“Your reaction?” she asked.

“They are partisan propagandists. They are liars,” he said. “This wasn’t a small detail in the story. It wasn’t said. It’s made up. It’s not true.”

Cruz said the facts didn’t “fit the narrative” so The Washington Post didn’t bother to check what was true.

“It was too good to check,” he said. “It fit the narrative too much.”