Ted Cruz: I could have stopped Texas church shooter - The Horn News 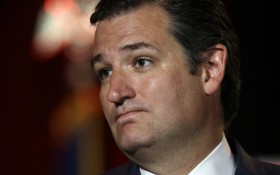 In 2013, Texas Sen. Ted Cruz had proposed legislation that would have prevented the atheist gunman from buying the weapon he used to slaughter women and babies inside a Texas church Sunday.

Democrats, however, filibustered the bill based on partisan politics.

Appearing on Fox News Monday, a visibly emotional Cruz said that he and Iowa Sen. Chuck Grassley had tried to keep guns out of the hands of criminals.

“We could have prevented this. In 2013 in the wake of Sandy Hook, I joined with Chuck Grassley and we introduced legislation that was called the Grassley-Cruz legislation,” Cruz said. “And it was aggressive legislation targeting felons and violent criminals to stop them from getting guns.”

“There were a couple of elements of that legislation that were critical. One, it mandated that federal agencies, including the Air Force, report to the NCIS because that was a problem back then.”

Did a 1934 Prophecy Predict These Earth Shattering Events?[sponsored]

“But two, and this is an even more critical piece — If it had been reported to the background database, when [the gunman] went into academy to buy these weapons, he lied on the forms – that is a felony to lie on those forms,” Cruz explained.

Cruz then placed blame on the failed legislation on the feet of Democrats — specifically, former President Barack Obama.

“But the Obama administration didn’t prosecute those cases. In 2010, 40,000 felons and fugitives lied and illegally tried to purchase guns. They prosecuted only 44 of them.”

“Gun control for felons and fugitives? Yes,” Cruz concluded. “For individual, law-abiding citizens? No, and the Democrats filibustered the legislation that would have resulted in this shooter being in federal prison instead of murdering those innocents in that Texas church.”

You can watch the powerful 6-minute interview here —