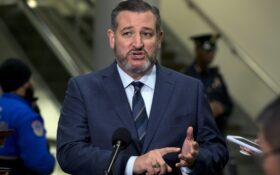 Sen. Ted Cruz, R-Texas, has gone viral for asking pointed questions during Senate hearings… and he promised to do a lot more of that during Congress’ next term.

As a Texan, Cruz began his television appearance by addressing the humanitarian crisis at the southern border, and then he offered a solution: Senate oversight into President Joe Biden’s Cabinet.

“With a Democrat Senate and Democrat House, there is zero oversight,” Cruz observed. “The Senate Judiciary Committee, we ought to be having hearings. We ought to have the head of the FBI, the attorney general explaining why he thought it was fine to send FBI agent’s in to raid Mar-a-Lago to raid [former President Donald Trump’s house. First time in history that’s ever been done! That was an abuse of power, but it’s routine.”

Before long, Cruz launched into his ambitious plans for the future of the Senate.

Cruz reserved his most pointed criticism for Garland, the head of Biden’s Justice Department.

“The House of Representatives needs to impeach Merrick Garland and they need to impeach Alejandro Mayorkas the secretary of Homeland Security, and we need to have trials in the United States Senate on their abuse of power and the incredible damage it’s doing to the rule of law and to Americans across this country,” Cruz said. “This Department of Justice, this FBI has now been thoroughly politicized and weaponized. Merrick Garland has done more damage to the credibility of the Justice Department and the FBI than any attorney general in history.”

In the past, Cruz clashed with Garland during Senate hearings.

For an idea of Cruz’s plans, take a look at this 202 exchange between Cruz and Garland —