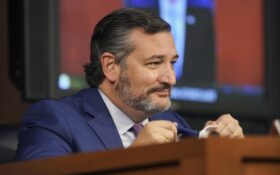 Who knew Sen. Ted Cruz, R-Texas, had a poetic side?

The veteran Texas lawmaker took to Twitter to deliver a short four-sentence “poem” to Vice President Kamala Harris — and it quickly went viral.

But it doesn’t seem as though this poem is filled with love and floral language.

In fact, quite the opposite.

Amid reports that Harris — the President Joe Biden-appointed “Border Czar” — will not actually be going to the border, Cruz penned a scathing verse directed at her.

The poem implied that Harris is willfully ignoring the crisis at the border, and only evil will win out. Human smugglers and drug traffickers have recently appeared in the media and many are reported to be having successes due to the Biden administration’s relaxed border policy.

As for Cruz, this alternative gig as a “poet” is just another profession he’s taken on since Biden has assumed office.

In his spare time he’s also been moonlighting as a journalist, recently going to the U.S.-Mexico border himself with a camera crew to find out the truth for the American people about the inflamed situation.

Since the Biden administration has seemingly ordered a media blackout on the crisis, Cruz has been among the most passionate voices working against the Democrats and their media allies.

Harris isn’t going to the border, and critics have suggested that there’s no indication if Biden is considering a trip.

Even people on their team know it.

Democratic Sen. Mark Kelly, D-Ariz., claims that the federal government has no plan to deal with the influx of illegal immigrants.

“This is a tragic situation,” Kelly said last week, “It’s a challenging one, it’s a crisis and it’s up to the federal government to provide the resources and the border security that we need and a plan.”

“And we currently don’t have a plan.”

The Democrats don’t have a plan, so Cruz wrote a poem.

2021 is certainly off to a strange year in politics.