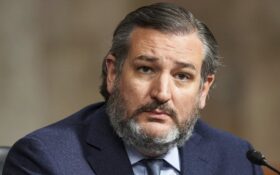 On Tuesday, police responded to the Houston home of Sen. Ted Cruz, R-Texas.

Inside the house, a 14-year-old girl had self-inflicted some stab wounds on her arms, police told KTRK.

Cruz has yet to confirm the identity of the stabbing victim. However, he has a 14-year-old daughter, a family friend mentioned the daughter in a statement to KTRK.

“This is a family matter and thankfully their daughter is OK,” a family friend of Cruz told KTRK that night. “There were no serious injuries. The family requests the media respect their daughter’s privacy at this time.” The girl went to the hospital.

Cruz’s colleagues have largely remained mum on the subject, given the Cruz family’s request for privacy.

However, conservative commentator Meghan McCain — the daughter of another U.S. senator — expressed sympathy for Cruz’s daughter.

“Leave the entire Cruz family alone & just send prayers,” McCain tweeted Wednesday. “There’s a special hell being a teenage girl when your Dad is a famous (Republican) politician and you’re in middle/high school -and I did it before social media and before journalists would target minors and report on them.”

Caroline Cruz, the senator’s 14-year-old daughter, has previously spoken about the difficulties of her role as a senator’s daughter.

“I literally have to have security following me everywhere,” she reportedly said on TikTok in January. “Like if I want to go on a walk through the neighborhood or to my friend’s house or something, I have to have like two security guards behind me the entire time… Some of the good things are we get candy and gifts in the mail. We also get to travel sometimes.”

She has also distanced herself from her father’s work.

“A lot of people judge me based upon him at first glance,” she continued. “But I really disagree with most of his views.”

Some observers, without evidence, have characterized the self-inflicted stabbing as a suicide attempt, but too little is known.

There’s a special hell being a teenage girl when your Dad is a famous (Republican) politician and you’re in middle/high school -and I did it before social media and before journalists would target minors and report on them.