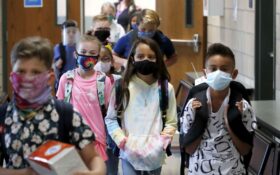 But one union boss is claiming none of that matters.

“Our kids didn’t lose anything,” United Teachers Los Angeles chief Cecily Myart-Cruz – who led a largely successful effort to keep most schools shuttered and kids at home through much of the pandemic – told Los Angeles Magazine.

Then, Myart-Cruz made some comments that have alarmed parents – essentially saying they learned woke left-wing politics during the shutdown in place of their classroom education.

Some students didn’t set foot in a classroom for a year and a half – precious time that education experts warn simply can’t be made up.

And knowing the difference between a riot and a protest… learning about “insurrection” and “coup” and other political events… won’t restore the essential math and science skills students need not just for college, but for the jobs of the next generation.

A study released last month by McKinsey and Co. found that the school shutdowns could “depress this generation’s prospects and constrict their opportunities far into adulthood.”

That analysis found students on average are four to six months behind in reading and math – and those are the kids in districts with the financial advantages that allowed better distance learning options.

Students in poorer districts did even worse, and are now up to seven months behind in their learning, the McKinsey report found.

And that could have permanent ramifications.

“The ripple effects may undermine their chances of attending college and ultimately finding a fulfilling job that enables them to support a family,” the report states matter-of-factly.

And that’s just the educational impact.

“The medical evidence is clear that keeping public schools closed is catalyzing a mental health crisis among school-aged children in San Francisco,” Dr. Jeanne Noble, the director of COVID-19 response for the UCSF emergency department, said earlier this year, according to the ABC News station in that city.

A study published earlier this month found “a small association between school closures and worse child mental health outcomes,” with older students and – once again – low-income students suffering the most.

Despite those persistent links to poorer education and declining mental health Myart-Cruz resisted all incentives to get her teachers back at school and kids in the classroom.

Myart-Cruz slammed it as “a recipe for propagating structural racism.”

Some schools in the district partially opened in April for a limited form of “hybrid” education.

In August, most schools finally opened for normal – or as normal as possible – education in the district.

But the district isn’t free of controversy just yet, and it might never be: Myart-Cruz has also been leading an effort to radically remake the school life to match leftist ideals.

Los Angeles Magazine noted that she has pushed to eliminate LAUSD school police and incorporate “culturally relevant” courses – which is not-so-subtle code for a curriculum that’s politically correct but not necessarily historically accurate.

Reason, a libertarian magazine, said this is perfect argument for school choice.

“If education officials simply refuse to give students what they need, students should have every right to go elsewhere,” wrote senior editor Robby Soave. “And take their share of the system’s education funds with them.”