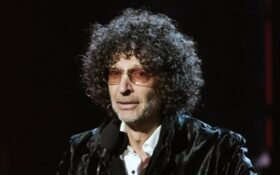 President Joe Biden’s crashing poll numbers have Democratic Party leaders quietly (and not so quietly) looking for a replacement — but this week, a particularly unusual alternative stepped forward.

It’s the radio’s shock jock Howard Stern… and a famous actor who, Stern says, has agreed to be his running mate in 2024.

The self-proclaimed “king of all media” said on Monday he’s seriously thinking about throwing his mic into ring.

Stern said the Supreme Court’s decision to overturn Roe v. Wade was the last straw, and now he wants to pack the court.

“I’m actually gonna probably have to run for president now,” Stern said on his nationally syndicated radio show. “I went into a long winded speech over the weekend to (co-host) Robin (Quivers) about how I am going to do the very simple thing that’ll set the country straight,” he said.

“The problem with most presidents, they have too big of an agenda. The only agenda I would have is to make the country fair again,” Stern said… and that will begin with throwing out most of the justices.

Then the 58-year-old Sirius XM radio host tore into several of the conservative Supreme Court justices, who voted that the Constitution does not guarantee a “right” to abortion.

Stern called Justice Clarence Thomas a “lightweight” thinker who is “deranged,” claiming Thomas has “been sitting there like Darth Vader, dormant,” plotting pro-life evil. Clarence Thomas has just been “waiting and waiting through the decades until” President Donald Trump appointed Justices Brett Kavanaugh and Amy “Coney Barrett — whatever the f–k her name is.”

“These justices are deranged,” he said.

Stern, who has morphed from an unpredictable and off-the-wall commentator to another liberal media figure, launched into a defense of abortion.

“Everyday women who go to the doctor and they find out that the baby has horrible birth defects,” he said, although only 0.69% of women say they have abortions due to birth defects, out of the hundreds of thousands of abortions happening each year. “A lot of times contraception doesn’t work,” he added, implying he believes abortion should be a form of birth control.

He then claimed that Clarence Thomas is “going to undo gay rights—you know, gay marriage.”

“I hope they roll it all the way back to slavery, and then they slap him on a plantation,” said Quivers, who is Black.

Stern said that Cooper congratulated him on his presidential run after Monday’s show. “I said, ‘How would you feel about being the vice president?’ And you know what he said? ‘Done!’” Stern told his audience.

He said Cooper’s only concern was, “I’m another white male.”

“I think people would understand,” Stern reassured Cooper, who played Rocket Raccoon in “Guardians of the Galaxy.”

Stern has made his political ambitions known in the past. He ran for governor of New York in 1994 on the Libertarian Party platform, but he withdrew before the election because he found out he would have to disclose his financial information.

Stern mused about running for president against Donald Trump last November, saying he’d face the 45th president and “beat his a–.”

But many have pointed out that Stern has changed a great deal since his freewheeling days, when his devoted fans would call Larry King just for the chance to say Stern’s name on another show.

Stern called his own listeners “f–king morons” if they refused to get masked and vaccinated. America “is turning into a third-world country because of the f–king morons we have living here. It’s a sad commentary on my country,” he yelled over the airwaves.

He later said government officials should “bench” any “douchebag” who refused to take the COVID-19 vaccine and booster shot.

Those positions may be just the ticket to lead the Democratic Party in 2024, as the party remains the home of diehard vaxxers and mask-wearers.

And there’s definitely room for someone to challenge Joe Biden in the 2024 primaries. Biden’s poll numbers, which are in dangerous territory with voters nationally, are also falling in his own party. Liberal outlet The Daily Beast ran an article titled, “Biden Deserves a Primary Challenger.”

“In recent weeks, we’ve seen signs that a miniprimary is underway,” wrote an author at The Washington Post. He pointed out that Vice President Kamala Harris and Illinois Governor J.B. Pritzker have been speaking in early primary states.

Whether Howard Stern, whose show once featured a character named “Fart man,” could carry that mantle is an open question—but the fact that it’s a question at all says a lot about the danger facing the Biden-Harris re-election campaign.