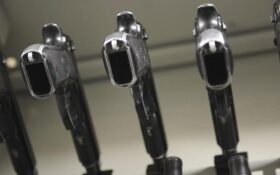 A tracking tag that some units in the U.S. military are using to keep control of guns could let even low-tech enemies detect troops on the battlefield, an ongoing Associated Press investigation has found.

Radio frequency identification technology — RFID, as it is known — is everywhere in daily civilian life.

When embedded in military guns, thin RFID tags can trim hours off time-intensive tasks such as weapon counts and distribution. Outside armories, however, the same silent, invisible signals that help automate inventory checks could become an unwanted tracking beacon.

A few key takeaways from the latest in AP’s AWOL Weapons investigation:

Convenience is a big selling point for retrofitting an armory with an RFID system.

Instead of hand-recording firearms on paper or scanning barcodes one-by-one, troops in an armory or arms room can read tags in a rack of firearms with the wave of a handheld reader — and without having to see each weapon. The tags tucked inside don’t even need batteries.

The benefits are real.

At Eglin Air Force Base in Florida, officials say the new RFID system in one armory cuts inventory time in half. That limits the need for two armorers, creating more schedule flexibility. Other military officials described how RFID streamlines the process of checking weapons in and out.

New field tests showed that an enemy wouldn’t have to be cutting edge to identify U.S. troops at distances far greater than contractors who install RFID systems say the tags can be detected.

Contractors say tags can’t be read more than a few dozen feet away. In experiments organized by AP, prominent cybersecurity experts Kristin Paget and Marc Rogers were able to read a tag in a rifle 210 feet (64 meters) away using a $500 setup.

The hackers observed U.S. rules on radio signal strength. Paget has concluded that anyone who disregards those regulations could detect a tag from miles away.

A Department of Defense spokesman cited that kind of concern in saying Pentagon policymakers oppose embedding tags in firearms except in limited, very specific cases such as guns that are used only at a firing range — not in combat or to guard bases. “A significant operations security risk in the field,” is how Pentagon spokesman Lt. Col. Uriah Orland described RFID tags in guns.

In the Air Force and Army, unit commanders are allowed to add RFID systems to armories as a further layer of accountability. Spokespeople for the headquarters of each service said they did not know how many units have RFID armories. No service-wide requirement is planned.

AP found five Air Force bases that have operated at least one RFID armory, and one more that plans a retrofit. A Florida-based Army Green Berets unit confirmed it uses the technology in “a few” arms rooms where special forces soldiers can take tagged weapons into the field.

The Navy told AP it was using RFID in one armory. Then this week, after extended questioning, spokesman Lt. Lewis Aldridge abruptly said that the technology “didn’t meet operational requirements” and would no longer be used.

The Marine Corps said it has decided, across the service, not to tag weapons. Among the concerns: digital signal on the battlefield.

A top weapons expert from the Corps told AP he saw how tags can be read from afar during training exercises in the Southern California desert in December 2018.

“RFID tags on tanks, weapons, magazines, you can ping them and find the disposition of where units are,” said Wesley Turner, who was a Marine chief warrant officer 5 when he spoke in a spring interview. “If I can ping it, I can find it and I can shoot you.”